A typical day in Paradise

I think I mentioned that I am without a camera and have to keep jumping at the chance to borrow one every time the opportunity presents itself, so I cannot post as many photos as I would like.

I have a replacement camera waiting for me in Germany but I am too tight to have it DHL'd over so am hanging on until I hear of someone trustworthy heading this way from Europe. I did take a load of photos with Joaquim's camera and then, at the end of the day, when I asked him how he downloaded his photos, he looked at me with that sort of blank look which leaves you in no doubt that what you are about to hear will be less than encouraging. I'll summarise it. Joaquim has a digital cammera but no computer or any other way of storing or sharing his photos. Since he never needed them, he has lost all cables but the charger. Bugger.

Yesterday we went fishing and I suffered a really bizarre accident.

The weather was pretty overcast and the sea that sort of slick oily swell that has you chumming it with your breakfast in no time. Joaquim was driving the boat and I was minding the rods trying to decide whether I had the energy to crawl up and lean over the side or just vomit where I lay. Joaquim, on the other hand, had munched his way through the crackers and was now busy emptying my hip flask. At that moment, one of the rods struck and the line tore off the reel. I jumped up, grabbed the rod, set the hook and then put my back into it. Now we only have a very small skiff. The sort of thing you can rent by the hour on an English pond and would never, by even the greatest stretch of the most fertile imagination expect it to be granted a seaworthiness certificate but I am a) poor, and b) a keen fisherman, so sod HSE.

Trouble was, the boat was rocking like billy-oh and on pins already weakened by age and nausea, I was about as steady as the Millenium Bridge Mark I. There are those who contend that there is no such thing as an accident (litigation lawyers love them) and that an 'incident' is merely the distillate of a series of minor events. Well, in my case, I needed only two events. The fish, still pulling line like an express train decided to double back at exactly the same moment Joaquim decided to turn into the fish to save my line and, ironically as it transpired, my back breaking effort.

Suddenly relieved of the drag I was leaning against, my feet shot out from under me and I went backwards straight over the side but not before folding myself double on the side of the boat in a manipulation my spine was never designed to cope with. Now a decent multiplier and carbon fibre boat rod is a not inconsiderable investment so I suppose I should not have been as surprised as I was when I surfaced and realised I was still hanging on to the rig like grim death. I was in agony and had inhaled half the Atlantic Ocean and then I saw Joaquime leaning over the side so I held out the rod so he could pull me in towards the boat. I got my arm over the side and he took the rod, no doubt to dump it on the deck before hauling me in.

Joaquim is, like me, mad on fishing. Abandoning me to my watery fate, he reeled in the slack and started to play the fish. He called down to me to see if I was OK. 'I can't climb in by myself, Joaquim', I called out. 'So cinco minutos', he replied. Only five minutes, a true professional.

He brought the fish in and then he landed me.

So here we go with a pictorial record of some of my day. First, our little boat: 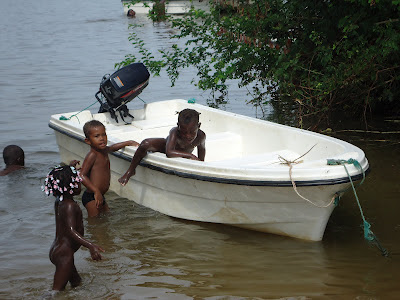 Next, Joaquim with the only fish we caught because we had to end the trip early because I fell out of the boat breaking my back in three thousand places: 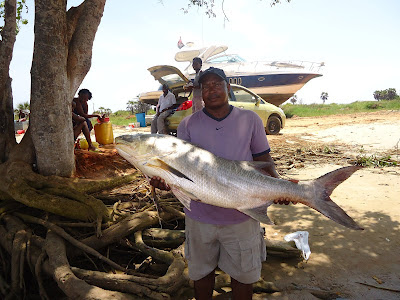 Another shot of the smug fat bastard holding what should have been my fish. I mean, I set the hook. Of all the dirty tricks to tip me overboard. Did I mention he was a complete bastard? 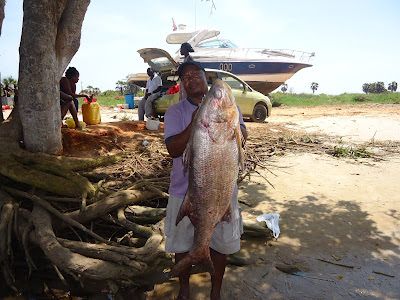 I ask you, does that look like a completely smashed and deformed back or what? Still, we needed to bag the fish so what is a little transitory pain especially with all those blokes around ready to take the piss? 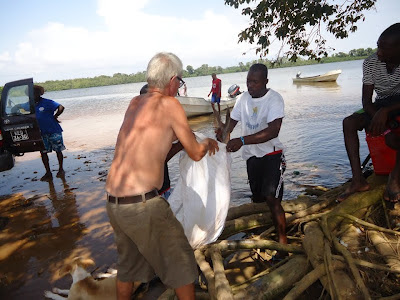 A wash and a change of clothes later, I sit on splintered shards of vertebrae and put on a brave face. 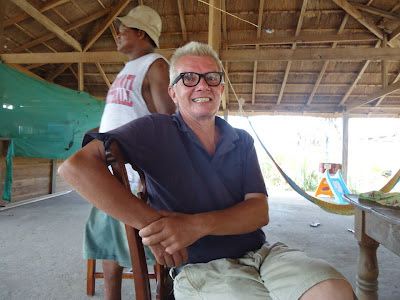 Alex wants me to go down to the river to swim with him. I explain that Daddy has done enough swimming for today and Daddy's back really hurts. You can see Alex was deeply skeptical. 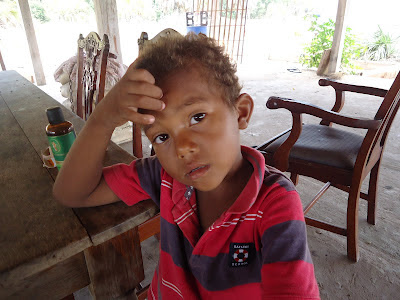 Then Marcia says she has run out of soft drinks and asks me to drive the six clicks up to the top village and buy some off the Lebanese guy. Six clicks isn't far but it will be in a truck with Brunel suspension over local roads. This stretch is the good bit. I can hit third gear briefly. 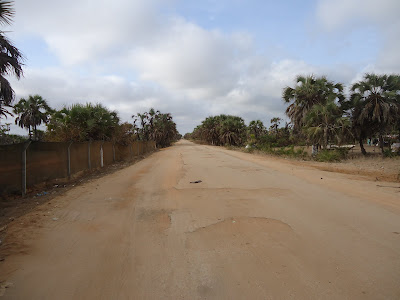 On the way, we passed Joaquim's house. How crass of me to assume he had a laptop. 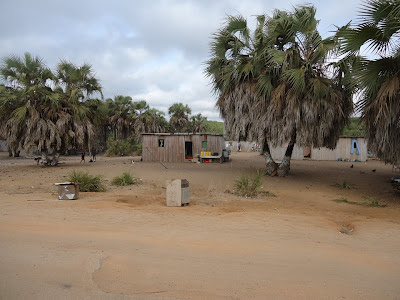 Once we arrived at the top of the hill, we had a wonderful view of the valley and river estuary that is now my home. 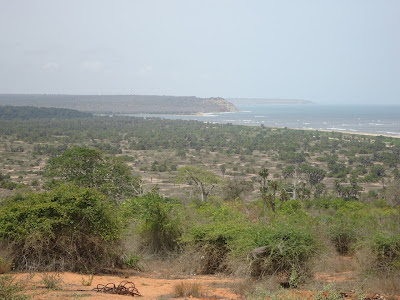 On the way back, Joaquim finally took pity on me and said he knew of just the place I could get the urgent medical attention I so obviously needed so we stopped off. 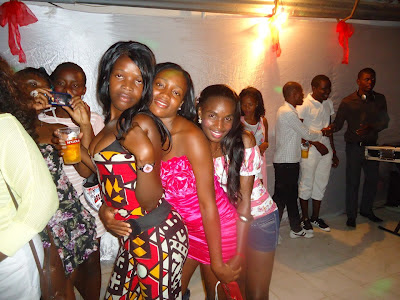 Back at Ops HQ and unaccountably refreshed, there was little else to do but write it all up. 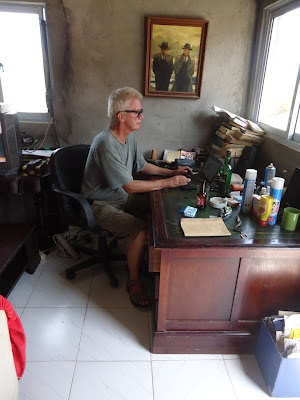 It's bloody hard work buildiing a restaurant in the middle of nowhere.

But, there is no peace for people like me. The sun is setting and I must now do the village water run.
Posted by Hippo at 14:14