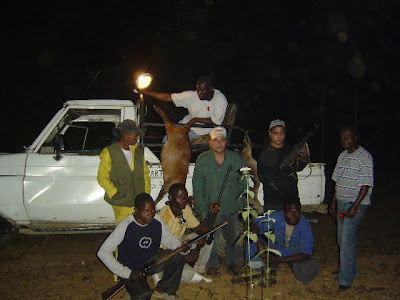 I have not managed a run ashore to slot any of the local wildlife for ages and the ever increasing amount of time I am wasting surfing the net trying to decide which would be best, a 'sensible' 30-06 (since we can 'acquire' the ammo from the local military at next to nothing) or my current fixation, a flat shooting Remington Sendero in 300 Remington Ultra Mag (which will require the difficult importation of ferociously expensive factory ammo) is testament to this. I need to take a break and get out in the bush. And soon.

It is odd, the way we all can justify even the most bizarre desires. I haven't shot anything at much over a 100 yards for ages yet I am irresistably drawn to the Sendero. You could set up a 30 inch tube, 500 yards long and with that rifle, and that ammunition, put one round after another down it without one of them rattling the sides and they would still have over 2100 foot pounds of energy at the end. Overkill? Not half. Basicaly, if I could see it in the cross hairs, it's dead. And without me having to exercise whisky depleted brain cells with ballistics calculations too much. For anything deer sized and up, the kill zone is bigger than the anticipated spread, just point and shoot. Undoubtedly, with this new and increasingly, to me, essential addition to my armoury I would be comfortable taking longer shots. None of us relishes the prospect of tracking a winged animal across miles of countryside so limit our ranges accordingly. How many of us have scoped an animal and given it up in favour of a long route march in the hope that the beastie will keep going in the direction we suppose so that we can get a more certain shot only to find sod all at the end of a lung bursting slog?

Read the US sites and you will discover how many of these rifles are available, second hand, hardly used. Not because it fails to live up to Remington's claim to be the most accurate 'out of the box' rifle, but primariliy, it would appear, because of the recoil (so buy a .22 and stop complaining) and also, significanlty, because of the weight. Weight? Nine and a half pounds? I defy anyone that is reasonably fit to tell the difference between a cumbersome and awkward nine and half pounds and an eight and a half pounds after a few hours of bush bashing. And besides, that's what bearers are for.

I know that I am talking myself into it. I know that a 30-06 will do all that I could expect of it but, well, you know.

Anyway, since I have very kindly been linked to a true hunting site, 'Bashing Bambi', for those of you surfing over here from Bambibasher's musings I reproduce a section of an earlier post related to hunting in Angola: I promise to get out as soon as I can and post more.

We have found an excellent place in the interior to go hunting. It’s a valley accessible only via an overgrown track and is full of Guinea Fowl, Francolin, deer and Pacassa (a sort of African buffalo, meat is fantastic). The local village Soba, to whom one should always pay one’s respects, said that noone had been down there for years. So we dashed him some sacks of pulses and the odd cans of this and that and he agreed that if any other hunters turned up, he would tell them the track is mined. Funny how the accepted wisdom of moving about in a mine polluted environment, primary of which is avoiding exactly what we drove down, a track unused for years, is subsumed by the desire to hunt. I remember reaching a village the occupants of which, were forced to walk miles for water yet within 500 yards, there was a river. There was also a bridge so the banks and abutments had been sown with mines in a futile attempt to prevent its destruction (the remains of it were barely visible above the tea coloured flow).
‘How long has it been like this then,’ I asked of the assembled village elders who were by now well into the couple of bottles of Passport Scotch I had given them.
‘Years’
That could be a couple or twenty. Didn’t matter. These were once again virgin waters. Yes, I was going to demine a route down to the water anyway, but I was bloody well going to take my rod with me. Best day’s fishing I’ve had since spending a day hoiking Barracuda out of the waters around the mangrove swamps of the Cayes off Belize.

I wanted to import a decent rifle and shotgun but found out that there is a blanket ban on importing firearms to Angola so I’m pretty stuffed at the moment. My pal, Julian, has a 30-06 Moisin Nagant, which must have seen service either with or against Napoleon’s troops in Moscow. It was ‘legally’ acquired as part of the process to obtain a firearms licence from the police.
‘So, you want a firearms licence, do you? Well, you’ll obviously be needing a firearm and guess what?’ (You can see this coming, can’t you?) ‘We just happen to have one on special offer…’
You can see your file in front of him. He’s grinning, it’s a game to him. On top is a piece of paper, a form, already filled in with the irregular typeface of an antique manual typewriter, the ribbon on its last legs. There is your name at the top. Surname mixed up with Christian name and inevitably hopelessly incorrectly spelt. A single passport sized photograph is clipped to the edge, the whereabouts of the other three they insisted they needed unknown. Just one signature, that’s all that separates you from a licence to kill. His signature. By the same hand currently wielding a conglomerate of corrosion and decay, a barely convincing semblance of a lethal weapon. It has taken months to get to this stage.
‘Oh, alright, I’ll buy the bloody gun as well.’
The resignation with which the last is delivered is usually quickly followed by a strangled, ‘HOW MUCH?!!!’

Scrap metal is expensive in Angola. Or at least firearms certificates are.

Most of us are aware of what could go wrong when the chamber of an ancient and badly maintained weapon is unexpectedly subjected to the enormous pressure generated by exploding propellant contained in cartridge cases devoid of any residual ductility, burning rates significantly affected by the projectile’s reluctance to squeeze itself along a heavily corroded barrel and, judging by Julian’s expression as he screwed up the courage to fire it for the first time, such visions were unwelcome visitors to his consciousness as well. After all, there is not much that can be done to alter the design of the weapon so sighting along its barrel means that the short trajectory of a departing bolt will inevitably, painfully, perhaps fatally, be arrested by the skin, bone and gristle of the firer’s face. Either way, a failure of the sears, pins and detents designed to hold it all in place will leave an indelible impression on your mind. Now that I know it works, though, I’ll use that for the time being as I cannot bring myself to hunt with an AK. Accepted wisdom, by the way, suggests that a heavy bullet must be used for Pacassa and that a 30-06 or 7.62 short is a bit light but someone has obviously forgotten to tell the locals that. The sight of a wizened local guide, so old that his age could no longer be determined with anything approaching accuracy, as he calmly stood his ground and reloaded an ancient single barrelled Baikal and poured load after load into a no doubt surprised and increasingly outraged bull Pacassa is one to be cherished and should form an essential part of British Army Training videos.
Posted by Hippo at 12:50 No comments: