A Surprisingly Inexpensive Taste of Paradise

Marcia rang me.  She has the unerring ability to ring when I am at my busiest.

‘Andy!’ she gasped, clearly excited.  For some reason she always refers to me by the diminutive of my second name, Andrew, rather than by the name under which I have dragged myself through life, Thomas.  Sometimes I refer to her by something other than her given name, but usually only when I am very annoyed, and definitely out of earshot.

Now bear in mind that I was in the middle of calculating the cost to the company in extra port and container detention fees occasioned by the negligence of the shipping company who, for reasons known only to themselves, unloaded our shipping containers into the wrong terminal.  I wasn’t dealing with a mere 1,200 kwanzas (about US$1.50), I was trying to recover a 100,000 times that much, $150,000.

Now that for the first time in over a decade, the crust I earn is paid in good old GBP, my salary is pretty much inflation and Kwanza devaluation proof so, although I could see nothing remarkable in 1,200 kwanzas for a bar of chocolate which, only a year or so ago probably cost around 200 kwanzas, much less why Marcia was ringing me to ask for permission to buy one, it is still only very small change.  I think a 100 gramme bar of Milka, my favourite, is about that in Shoprite.  Clearly, the bar of chocolate offered by Deskontão had something more to offer.

‘Sure, Marcia, fill yer boots…’ I hung up, only briefly contemplating the enormous cultural divide, and its sometimes bizarre consequences, between an African girl from the Angolan province of Uige, and a German bred Englishman.  It doesn’t, I have found, do to dwell on these differences too often as, sadly, it can easily lead to conflict arising from misunderstanding.  Best just to accept we think differently and do things in (very) different ways.  I went back to my calculations.

I had been home less than an hour when Charlie came in clutching a Bounty bar.

I have been away from UK TV and its adverts for more than thirty years but I still remember the for then, pretty racy adverts for Bounty chocolate bars; bronzed bikini clad young things slinking out of an azure tropical sea to munch on Bounty bars under the shade of a palm tree, all executed in a manner calculated to disquiet any adolescent with red blood in their veins.  Notice that the foregoing sentences were gender neutral?  We must all make a conscious effort to be inclusive and avoid offending, so I will content myself with saying that as a young male looking at the only male in the advert being fed Bounty bars by young ladies, with a promise of further paradise to come, I couldn’t help feeling he was such a lucky bastard. The adverts certainly did for me and I am sure are responsible, at least in part, for my gipsy feet.

‘Marcia!’ I exclaimed, ‘Bounty bars!  Are these the chocolates you bought at Deskontão?  Why did you buy only two?  You should have bought loads!’  I realize that Bounty chocolates contain two bars per packet, so two packets would suffice to give the three children and Marcia each a taste of paradise, but what about me?  I am sure a little sniffle of self-pity escaped me.

‘I honestly think two is enough,’ said Marcia, very sternly, even for a girl from Uige, ‘otherwise the children will get fat.  But, if you are sure you want more, I can nip back and get some, I have to buy cream for the cake anyway.’  So cake lathered with cream doesn’t make us fat, eh? ‘Please, Marcia, buy a few more!’

She returned from shopping and dumped two boxes of Bounty bars on the table, each box containing 24 double bars of Bounty.  I did a quick mental calculation, 48 x 1,200 divided by the official exchange rate.

‘Marcia, you just lashed out over 70 quid on Bounty bars?’

It’s this cultural divide thing again, I could see she was bewildered by my simple arithmetic.

‘That’s kicking the arse out of it,’ I continued, ‘I thought you were worried about the children getting fat?’

‘Well, you were the one who told me to buy more,’ she snapped, clearly irritated.

She had obviously been very pleased with herself, and for us let’s face it, for discovering such a delicacy, and it really seemed churlish of me to pick fault, so I picked up the boxes and took them to the pantry.  Where I discovered two more boxes of Bounty bars, each containing 24 Bounties.  We now had 96 bars of Bounty, less the two already consumed.  The shopping receipt was still on the kitchen table so I had a quick squint.  Marcia had paid 1,200 kwanzas for a box of Bounties.  Bounties at five-pence ha’penny apiece? Wow!

Sorry is so hard to say, especially with a gob full of Bounty bar, but I will get around to it…

I was a bit distressed to learn that an old mate of mine who had recently been in the 'Lundas' in NE Angola sorting out a hydro project, and had fled back to UK with a severe bout of malaria, was discovered by his sister dead in his rooms.  I did not have the heart to ask if he still had his boots on, but knowing him, I bet he did. 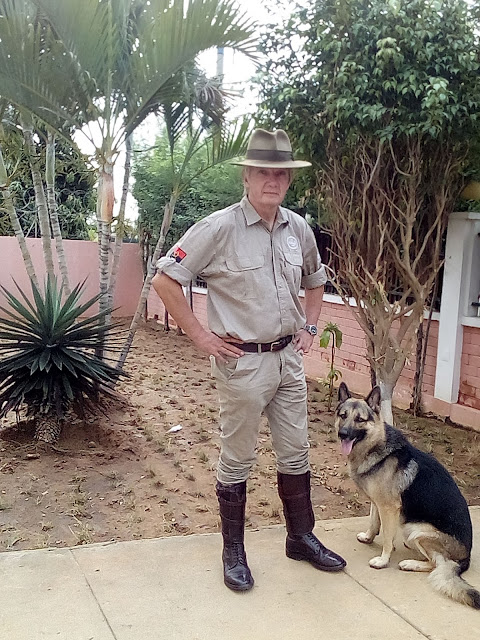 I have passed by the barber's since this was taken last week.  Doesn't do to cut my hair too often, or wash for that matter, confuses the dog...

In my humble opinion... Just wonderful