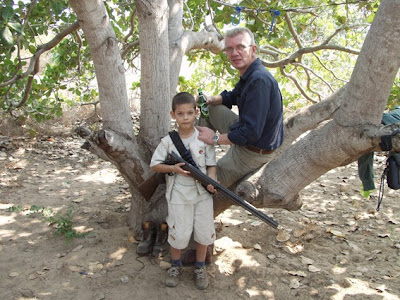 A bit of an update. I have recently been pretty lazy regarding the blog but in my defence, I have been quite busy.

I paid my dues to Marcia’s family and things are OK now. Her family accept that until I have my residency, I cannot divorce Dominic’s mother or I will risk the invocation of the expulsion order I received back in 1997 when they kicked all the undesirables out. I was only allowed to stay by virtue of being married to an Angolan. I had to sign a declaration, though, that I would never again be involved in ‘Security Services’ in Angola. Until I get my residency then, the family at least can see evidence of my fidelity and that I treat Marcia better than most men, especially around here, treat their wives.

I finished installing the wood floors and the kitchen in the new house during my recent leave and Marcia now lives there. Dominic and I spend most weekends with her. It really is pleasant inside but the garden still looks like a building site. The offers for the house are trickling in but we are holding out until the pool is finished and the patio around the pool laid. I made the mistake of importing a prefabricated pool from South Africa. What a bloody disaster. Everything went swimmingly (sorry) over the weekend as we completed the final, three week long installation and last night, at 1800hrs, the tanker came and we swam in the pool for the first time. This morning I woke to a scene of utter devastation, one of the walls had given way. I have had to leave Marcia to try and sort it out as I had to get back to work.

I really do like the house, the design, the layout and the finish but as with anything one attempts for the first time, building a house presents a steep learning curve and we made many mistakes, some of them expensive. I am, therefore, looking forward to selling it so that we can start building the next houses where, hopefully, we will fall victim to fewer errors. Most of the errors, by the way, fall under the category of ‘False Economy’. The pool is a classic example.

I am hoping that I will get enough for the house to simultaneously start the build on the big plot near the original house (where we want to put at least eight houses), and the house on the River Kwanza. If they could go up at the same time it would be marvellous. It would be nice to have a house that was not destined for sale so that we could make it a home. At least with the Barro de Kwanza house being on the river only a few hundred yards from the beach and sea, I do not need to worry about a bloody swimming pool!

Dominic has just gone off to school having spent an evidently enjoyable weekend racing his motorcycle across the countryside and then yesterday evening, jumping around in the pool (fun while it lasted). Finally, he is starting to see some of the results of all my hard work since the separation. I still feel very bitter that his mother’s selfishness, or hot knickers, whichever way you want to look at it, have robbed Dominic of his childhood. Only now is he slowly starting to enjoy the things that, had everything continued as they should have done, he could have enjoyed all his most formative years. I have given up working for my own benefit. With a very dodgy heart, failing eyesight and an inability to make the lifestyle changes that I should, all I want to ensure is that I leave my son with more than a watch and a pair of cufflinks, and see Marcia OK as well. After a very poor performance at school, I fought like hell in the Army to get on and finally succeeded in gaining a commission. With a foresight that belied his scatty appearance, my company commander at Sandhurst called me in and during a fairly convivial interview, reminded me of where my determination had brought me and then, with stunning perceptiveness asked me, ‘What are you going to do now?’ Being young and stupid, I failed to grasp his point but time, very little of it as it turned out, proved him correct. Without a long term goal to push for, I would become, as indeed I did, a ship without a rudder. Bored in other words, and never a truer word spoken when old sages remind the young that the Devil finds work for idle hands. My long term goals now are a decent house in Europe, a house here and a decent sport fisher tied up at the jetty next to my house on the Barro de Kwanza. I am 30% of the way there but I do find myself wondering what will happen to me if I do achieve them. Knowing my luck, I will be found dead in the cockpit of my beautiful sport fisher, the instruction book in one hand and the unused ignition keys in the other... Still, I will be grateful if God gives me that long having called me in for three hat on, no coffee interviews so far.

I was called to collect Dominic last Thursday. A quite unusual occurrence and all the more anxious as the telephone communication was opened with, ‘now, there is no need to worry...’ Naturally, in a town where one could be considered lucky to be able to engage third gear, I hit over a 120 clicks accompanied by a frankly quite terrified driver (who had been relegated to passenger as a result of his to me, criminally sedate progress during the early stage of the journey to the hospital, and was now weeing into the cushion of the passenger seat next to me and wondering when the airbag would explode into his face). I bounced up onto the pavement in front of the clinic, told the congregating security guards and Police to fuck off, burst into the clinic and there he was, my son Dominic, his beautiful visage now blighted by a row of stitches perilously close to his already blackening eye. Even I know that it is hard to sit an eight year old down and demand off him ‘what the Hell happened’ without intimidating him slightly so instead, I headed back to the site, collected two of Dominic’s favourite engineers, Bill and John, and together set course for the Chinese restaurant. Still he would not say.

Slowly, over the course of the weekend, the story came out. I have conducted murder investigations that were easier. Apparently, there is a new girl at school who travels on the same bus as Dominic. While evidently a hit for Dominic, she was the subject of some considerable bullying by certain other boys. Obviously something happened while they were all trapped in traffic (exact details still unclear) but whatever it was, it was sufficient to provoke a reaction from Dom who, it is alleged, launched a vicious and sustained attack on one of the boys, two years his senior. Apparently he managed to head butt the boy several times in the confined space of the third row of seats before the others dived in, whereupon Dominic inflicted some further fairly widespread damage before being struck by a boy wielding, believe it or not, a seat belt buckle which of course, opened his face. That was the bit that the bus driver, having managed to bring his vehicle to a safe stop, witnessed. The facts that Dominic , rather unsurprisingly, came off worst and that the only adult witness seems to have a bit of a soft spot for him and coloured his testimony accordingly, are the reasons why I am writing this and not being arraigned in front of an Angolan tribunal as a prelude to being sued by irate parents. So what conclusions can we draw from this? About the girl: Dominic is not a poufter. And if he turns out to be one, then at least he understands his duty to protect the weak. About the fight: Dominic is no chicken. About his subsequent reticence, his unwillingness to name names: he is an honourable man. It’s a bit hard to tell him off really, isn’t it? God I hope he joins the RAF. I would blub uncontrollably at his passing out parade. Is there a school I can send him to in UK that feeds all its output to Cranwell? He keeps asking me about when he can go to that school, the one that he can sleep at.

So, as you can see, life continues pretty much as normal. For the Gowans’ family that is, not a ‘normal’ family. My client is evidently quite happy with the service I provide and has asked that this site be doubled in size and another 30 MW site be constructed elsewhere in the city. Target date? Christmas day naturally, so it’s another case of ‘Merry Christmas, Mr Thomas’. Still, unless I seriously fuck up, I think it unlikely that I will find myself buried up to my neck in sand under a hot sun humming ‘Ground Control to Major Tom’. Who would have thought, though, when I marched out onto to Old College Square 23 years ago, that I would end up building and running power stations in Africa? Me? The only thing I know about electrickery is that sticking one’s fingers across the terminals is bound to hurt.
Posted by Hippo at 16:00 1 comment: