I seem to be spending a lot of time at the airport, shuffling colleagues off to enjoy leave or pastures new, or welcoming those who have decided to contribute their services to the Angola project. I really do not mind.  I only have two drivers worth a salt and I think they appreciate the fact that I am not averse to including my name on Part One Orders as Duty Driver thereby giving them a well-deserved rest.

I do have a third driver and he is good, very good, as long as I do not task him anywhere near a main road.  Driving with him calls to mind the old joke, ‘I would rather die in my sleep, as did my bus driver father, than screaming as did his passengers.’

In front of the international airport in Luanda is a roundabout and overpass.  Coming from Nova Vida, the pleasant suburb in which we are based means surmounting a bridge and then hooking right down to the airport.  Given that even the best of our drivers have no lane discipline, for the passenger this is a manoeuvre best endured with eyes closed.

Just recently, however, and for the aforementioned reasons, I have been driving passengers to the airport and, wisely, I think, confident my passengers would concur; I have executed this with my eyes open.  Imagine my surprise, therefore, when cresting the bridge before swinging down to the right and the international airport beyond, I happened to glance left and spot a new roulotte.

Roulottes are great.  Although pretty much illegal.  As in all things Angolan, it depends on whom you know.  Years ago, Luanda was full of them, one on almost every street corner.  From them one could order a Burger or a Hot Dog. Just the sort of healthy sustenance a chap needed to successfully navigate on unsteady pins between his preferred watering hole and his final resting place, be that his scratcher or face down in Luanda Bay.  Either way, it was always a pleasure to pass out with a belly full of street burger rather than a bandit’s knife.  Then the Angolan Government decided that such enterprise was counter-revolutionary and all roulottes were suddenly hauled off the streets.  Lest we judge, consider what would happen to anyone setting up a trailer-mounted hot dog stand on the corner of your residential paradise in UK without first jumping through the multiple hoops of local authority bureaucracy.

But I digress.  What made me do a double take (very nearly causing me to execute a short cut off the over pass plunging me, the car and a wholly innocent passenger to the ground and fiery death below) was not so much the existence of the roulotte, but the name its entrepreneurial owner had selected for his venture into express epicurean services.

In English, a proper language and one, since the publication of the King James’ bible in 1611, even God thought best to learn so he could keep up with the activities of an island of marauding pirates, the name elected as representative of the services on offer refers to a solitary, rather desperate activity.  By ensuring regular entry into normal, healthy relationships, I have managed to palm off, so to speak, any personal indulgence in the same but surely, I wondered as I dropped a visibly shaken and stirred passenger off outside international departures, something has been lost in translation.

Well, there was only one way to find out.  As soon as the still tremulous voice of my passenger confirmed by telephone that she had successfully checked in, passed through customs and immigration checks and had scooped a few calming G&T’s without fainting in the departure lounge, I made my way out of the airport in the direction of the roulotte.

The direct headline, the name of the roulotte, had attracted my attention but there was an indirect headline inscribed below, noticeable only when I was within thirty paces so close enough to discern it with aged eyeballs:  A força da juventude empreendedora.  In God’s preferred patois, this means: The Strength of Entrepreneurial Youth.

Good Lord.  Laudable.  I am all in favour of empowering youth, and women, any disadvantaged group and, indeed, the roulotte was staffed by vibrant, intelligent and oh so helpful youngsters, most of them female.  It has been many years since I stood on an Angolan street quaffing a beer while my evening repast was prepared with undeniable skill before my very eyes.

I was though, there on a mission.  I wanted to know the origins, the motive for the choice of name.  It wasn’t the sort of thing I felt a chap could broach with the lovely Paula, busy frying up the most perfect egg to surmount my burger so I called the only male on duty to one side and explained everything.

‘Fraid so’, I said with the sangfroid the English claim as theirs, but still confess to in French, ‘Perhaps this word means something else in a local language?’ I ventured hopefully. In Angola there are at least ten distinct local languages in addition to the Portuguese imposed upon them.

There are subjects a chap will simply no longer discuss post educationem and I was hoping for a degree of discretion but he decided, evidently as a good Socialist, to open this up (occasioning my acute embarrassment) to the general appreciation of his female co-workers, including sweet and innocent Paula who was at that moment assembling my burgers in such a manner I could not help but recall, I was once young.

‘That is our Boss’s name’, they assured me once they had recovered their composure and wiped tears of mirth from their eyes.

‘Oh God no!  Please do not tell him what his name means in English I implore you!’ I implored with all the vigour of a Shakespearean veteran. ‘And if you feel compelled to do so', I continued, 'please do not tell him it was me that told you,’ This with a sincerity my beating heart told me that this time was genuine.

The burgers were fantastic, prepared and served by a young, animated and such a pleasant team.  I never knew an 'ahem' in public could be so gratifying. 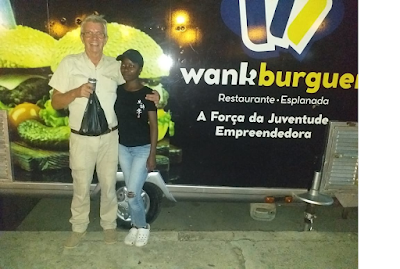