“I was walking through the garden one day!  In the merry merry month of… September”


The generator is located on the far side of the shop from the house.  This is great when it comes to reducing noise pollution but means a bit of a walk when it comes time to shut the generator down at night.  Since we do not have the concrete pathways thrown yet, this means a Beau Geste style slog through the sand that is my garden at the moment.  It’s no hardship really.  On a clear night, the stars, filtered through the rustling leaves of the many palm trees on the property are divine and Charlie loves these walks.


As this is a hot country, I tend to wear sandals and shorts when at home, far more comfortable and convenient than boots and safari gear.  But this is bush.  My nearest neighbour is half a mile away and at night, the silence is deafening.


Just over 36 hours ago, I set off for the generator, Charlie gambolling along by my side when I suddenly felt a sharp pain in my big toe.  I shone the torch down to inspect it but could see little else but a couple of beads of blood.  There is a type of weed that grows in profusion around here that casts spiky seeds presenting a constant, but no more than irritating hazard to those walking in bare feet or, indeed, sandals, so I thought no more of it, switched the generator off and went to bed.


At in the morning I woke up.  My toe was on fire.  Bugger, I thought, I have probably picked up a chigger.  Chiggers are a type of flea that burrow into flesh, usually under toe nails and have to be carefully and painfully excised so as not to burst the egg sac for doing so would only multiply the grief.  My maid may be pretty much useless in all other respects but she is unsurpassed when it comes to digging chiggers out so I resigned myself to five minutes brutal torture the following morning and tried to go back to sleep.


By three in the morning, I was extremely discomfited.  By four I was running a fever yet my teeth were chattering uncontrollably I felt so cold.  I reached for the torch on my bedside table but clumsily knocked it to the floor the impact with which smashed it.


Bugger, I thought, a chigger AND malaria.  So I resigned myself to the few miserable hours left of the night before Marcia woke up and could go and get me a malaria treatment from the pharmacy.  I never slept a wink and as the throbbing of my toe increased and rose up my calf muscle, I wondered just how many chiggers I had picked up.  I spent that night sitting at my desk smoking and drinking whisky in the dark.  Just before dawn, shivering yet lathered in perspiration and with a blinding headache, I vomited copiously.  It’s definitely malaria, I thought as I hobbled painfully to the kitchen to feel around for a cloth so I could clean the mess off Marcia’s newly varnished wooden floor.


Just as it was light enough to see, Marcia awoke and came out of the bedroom.  ‘Don’t tell me you have spent the whole night in front of your computer drinking’, she said with ill disguised contempt.


‘I think I have malaria’, I said to her retreating back, ‘and I have a sore toe’


She didn’t say anything but her body language said, ‘Diddums’


I hobbled over to one of the windows and raised the blind to let in more early morning light before making my way to the sofa.  I placed my foot onto the coffee table so I could give my toe a good look.


‘Come and have a look at this, Marcia’, I called out.


‘I bet that hurts,’ she continued.


‘Well, it is jolly uncomfortable’, I conceded while I stared in fascination at my toe.  I decided to take a photograph:

A few hours later, I took another: 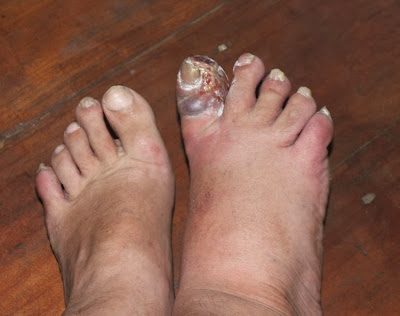 I have to confess, I was amazed at the speed of the necrosis.  The nip on the toe that started all this occurred Saturday night.  It was now Sunday so the nearest medical attention would be a clinic several hours away in .  All they would do is scrub the appendage and dose me up with antibiotics.  I was perfectly capable of doing that myself and, besides. Harald Klein was coming for Sunday lunch, our first ever guest to the new house and I had set my heart on preparing his favourite German dishes so I wasn’t about to call the whole show off over a sore toe.  Both of us, during the war, had endured far worse.


Klein is diabetic.  When he noticed my toe he was immediately concerned and produced his survival pack for diabetics and insisted on testing my blood sugar.  I never knew that the toes of diabetics could fall off suddenly.  Lepers, sure, no use playing poker with lepers, they’re forever tossing their hands in.  I thought untreated diabetics went blind, then fell into comas and died.  ‘Not so’, said Klein who, being German was too polite to acknowledge irony.  Good old Klein, he is the uncle I never had.


I submitted myself to the test (which required me drawing my own blood) and scored 115 on his machine.


‘Are you going to go to hospital?’ Marcia asked me much later that evening.


‘Nope.’ I replied without averting my gaze from the TV, ‘If I go to one of the clinics what do you think the Cuban doctor will do to my toe?’ I looked at Marcia, ‘realistically?’


‘Temos que cortar o dedo!’ I said in a probably very poor imitation of a Cuban doctor speaking Portuguese saying, “We have to amputate your toe”.  I think Marcia’s silence said it all.  Cuban doctor’s here are famous for amputating rather than reconstructing.


‘I am very fond of my toe,’ I continued, ‘we have been friends for life.  I am emotionally, figuratively and physically attached to my toe.  Just because he is sick, I am not going to abandon him.  I will wash him, excise dead flesh and dose myself up to the eyeballs with antibiotics.’  I decided to record another stage of my developing toe:


Last night was pretty uncomfortable, wild dreams, fever, sweaty, freezing wakefulness and throbbing all the way up to my knee.  My toe now looked like this: 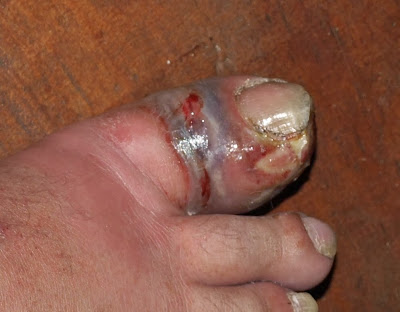 ‘Are we going to hospital?’ Marcia asked me.


‘It’s slowed down!’ I said to Marcia, ‘look! Last night it only advanced half a centimetre.’


‘I think we leave it one more day, Marcia,’ I said, ‘give the antibiotics time to kick in.’


Oh come on!  They don’t let you smoke or drink in hospital.  I’d only go there in a real emergency.