I guess I will never learn... 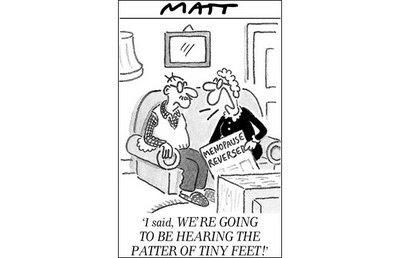 No one would be surprised to learn that children, the essential ingredients of a happy, stable existence are expensive.

I was two weeks late being born. The trees on Unter-den-Linden in Berlin back in 1959 were gently scattering their blossoms across wide pavements in the shade of buildings still scarred by the attention of the allies while my mother laboured with an increasingly fidgety baby who remained stubbornly reluctant to enter the exciting new world awaiting him.

No doubt exasperated by my tardiness, the consultant at the Military Hospital in Spandau advised my parents that a caesarean section and forced expulsion from my residence of the last nine months and disputed few weeks was the only solution. The time of my birth, therefore, was set for 10am the next day.

My father shrugged and pushed off to the Sergeant’s Mess leaving my mother to her rising panic. This was 1959 after all, and the idea of being sliced open and having the child she had nurtured at great physical expense dragged out of her womb by its heels was traumatic to say the least. I can imagine Aniela Gelinsky, my Great Grandmother, who spoke no English and German with a thick Polish accent, spitting on the shadows of the gynaecologists and pointing out that in her day girls gave birth in a barn without complaint and still had to make sure the men were fed at the end of the day. A turn in the fields would do the trick. Nature should take its course, not be hurried by the sacrilegious hands of mere mortals keen to empty a hospital bed space.

With a few litres of Berliner Weisse inside him and well used to the black art of military humour, my father was not about to fall for yet another prank and probably not so politely told the caller attempting to inform the father-to-be that his wife had suddenly gone into hysterical labour to fuck off. He knew his son would be born at 10 am the next morning so he had time for a few more jars and a decent kip before the wondrous event.

I am proud to say that my father was present at my birth, albeit under Military Police escort and bearing the scars of a verbal exchange that had evidently quickly turned physical. He held me briefly in his arms and then did his 28 days. He probably slept better than my mum and mopping jailroom floors and making his own bed was good training for the months to come.

Ever since then, I have always been late. I am famous for it. Years later, following my father’s footsteps, I had the full weight of the Manual of Military law launched at me yet was late for my own hearing. Fools, they should have jailed me as they did my father. At least I would have been forced to turn up on time and saved myself the ire of the Brigadier, a stinging fine and the hangover only self pitying overindulgence the night before in the company of some very sympathetic US and Canadian officers can induce. They, our over-the-pond and unforgivably maligned cousins, were even kind enough to stuff me into my dress uniform and help me start the car after pushing me into it. I am sure suiting me up with my Sam Browne on the wrong way round was a joke rather than because, as their uniforms resemble pressed boiler suits with everything held on with Velcro, they were unfamiliar with the addenda we adorn ourselves daily in the British Army.

Still, the Adjutant was a decent bloke so, with a pitying glance, he sorted me out and gave me a freshmint before pushing me in the direction of my fate. You carry your sword in and success is measured by whether on your way out it is still on your hip or jammed in your chest. I had forgotten mine so I had the Brigadier’s writing implement jammed in my eye. Fortunately, he was considered as dangerously incompetent as I was so he only had wax crayons to hand.

As I said, the Adjutant was a decent bloke.

I have rambled on a bit. I started by pointing out the obvious, kids are expensive, and then I banged on about a hereditary tendency to be late and get into trouble but the two are inextricably linked in the Gowans family.

Everyone recognises that it does cost money to look after a child: food, clothes, school fees and a thousand discarded toys, but no man can be mentally prepared for the costs before birth.

And I am not talking about anything as cheap and reasonable as weekly private medical attention in a city so expensive even Michael Winner would never consider writing a restaurant review here. He couldn’t afford it even if he could get an entry visa.

The house has only recently been built. A few months ago, I accepted that the constant attention of various tradesmen of the building kind, to sort this and that out and just tidy this bit up had sullied the place somewhat so agreed to having it all redecorated again.

Now I am told that the bedroom furniture ‘simply will not do’. Apparently the bed is too small and where will the baby sleep?

In a cot, preferably in any bedroom other than mine I thought surveying a bed big enough for a testosterone laden Prince to land his helicopter, shag the entire neighbourhood and get in a decent bit of rough shooting to boot without having to put a foot on the bedroom floor. It is so big I am amazed that after leopard crawling across a slightly larger version of Salisbury plain dragging a weapon the effectiveness of which has decreased with age and distance and the amount of post prandial whisky I have consumed, I still had the energy to get Marcia pregnant in the first place.

Or maybe it was the gardener. After all, I am away a lot. I’ll find out pretty soon, though.

If it was the driver, I will be really angry. Any fool can drive but it takes a man with real skill to turn desert into Eden. I would sooner look after the gardener’s genes than those of a wannabe Luis Hamilton who has remoulded all the panels of my truck against various gate posts and the bodies of those innocent road users arrogant enough to get in his way.

All the curtains need to be replaced. And the poles. Because the new curtains will have different lengths. That means the old holes will need to be filled which will leave scars that must be painted over. So we might as well do the whole house again. Even the armchair that has served me faithfully all these years is to be consigned to the annex. My armchair!

At least it won’t be lonely. It will be joined by the sofas, my ridiculously small side tables (perfectly acceptable for the demands placed on them: an ashtray and a whisky glass) and, incomprehensibly, my Persian rugs (although the latter might be a ploy for a new vacuum cleaner).

Marcia is determined to ensure Alexander enters a pristine new world. It is costing me a fortune and all I can pray for is that the little sod breaks a family tradition and arrives on time. Only painful labour will stop Marcia’s spending spree.

If he doesn’t, he better be a bloody good gardener.
Posted by Hippo at 00:46 2 comments: