Alessandro Manuel (to give him his Angolan name), by Tom 'The Bomb' Gowans (undefeated Light Middleweight), out of Marcia Francelina da Graça Manuel.

When is a boy old enough to learn to box?

Recently I had occasion to ask Alex if there was anything he wanted.  I was thinking of something small and lightweight, easily hand carried.

'Do you know what boxing gloves are, Son?'

'Are you sure, Son?  Wouldn't you rather have a radio controlled car or a colouring set?'

'If you don't want to buy me boxing gloves then don't.'

How the hell did a five year old learn to pack so much into a simple sentence?  He was simultaneously calling into question the reason for me even bothering to ask what he really wanted if I was then going to argue his choice, and demonstrating his complete indifference to a negative response.  There was no doubt about it, his little heart was set on boxing gloves.

That evening I told Marcia that Alex had asked for boxing gloves.

'Nem pensar!' she said, shocked, 'he is far too young and besides, he has too much energy as it is.'

I would have thought her last point was a damn good reason to get him the gloves.  He'd soon get knackered swinging six ounce gloves around.

The bag is made of a very heavy canvas and is designed to be filled with sand.  That would make it weigh a ton, Alex might as well be punching a wall and that would be both painful and not very realistic.  If he punched someone his own size, that person is going to give a little (or, hopefully, give a lot and fall down) but if he punched an immovable object, Newton's third law says it'll damn well hurt.  Alex weighs in at half a Bantam weight and ideally the bag should weigh his body weight plus around 30% to give him something to punch against without breaking his arm.  I decided to fill the bag with wood shavings mixed with sand.  First, though, I needed to work out where to hang it.  The veranda seemed the best place but there were no conveniently exposed beams so I had to put one in.  Naturally this attracted Marcia's interest, she still didn't know I had the gloves and bag.

Beam up and tested (if it'll hold up to me swinging on it, it would do as an engine hoist) I waited 'til the next morning with Alex in school and Marcia in town before going into the garden and filling the bag.  I think I overdid it a bit because my legs felt pretty wobbly as I climbed the stairs up to the veranda and there was no way I could hold it up at the right height for Alex with one arm and get the wire over the beam and through the shackle suspending the bag with the other.  I had to prop it up on a chair and wire it up that way.  Out of curiosity, I fetched my fish scales and weighed the bag, 35 kilos (77lbs).  Lighter than it felt, I must be getting old.

Alex returned home from school, saw the bag and immediately started punching it.  Marcia rolled her eyes heavenwards and tight-lipped stalked into the house.

'Hang on a sec, Son, you need these,' I said producing the gloves.

'Boxing gloves!  Thank you Daddy!' he said giving me the biggest hug ever.  Any doubts I had about the wisdom of this evaporated.  The gloves were real nice, as pro as junior gloves could be; good wrist support and a stitched thumb to avoid injury.

'OK matey, give it a go,' I told him and he let loose.  Most kids of his age would tend to slap, not punch, and then they would only throw one, pause and then throw another.  Not Alex.  He not only punched, he threw blisteringly fast triple combinations and had the bag flying about all over the place.  OK, he lacks any form of technique, obviously, but these are things that can easily be taught.  What impressed me was the instinctive way he put his weight behind the punch, the force of his punch and his footwork.

I hope it will burn up some excess energy, which he has in abundance, as well as building up his confidence.

I set my camera to shoot several frames in sequence and asked Alex to thump the bag for me.  Bear in mind, the bag weighs 77lbs and was static when he hit it with a single punch.  Take a look at these: 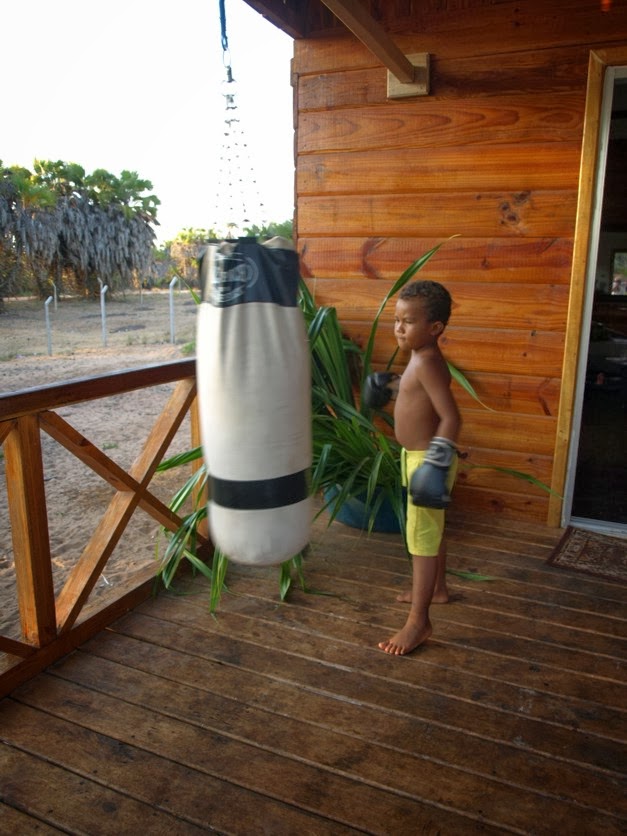 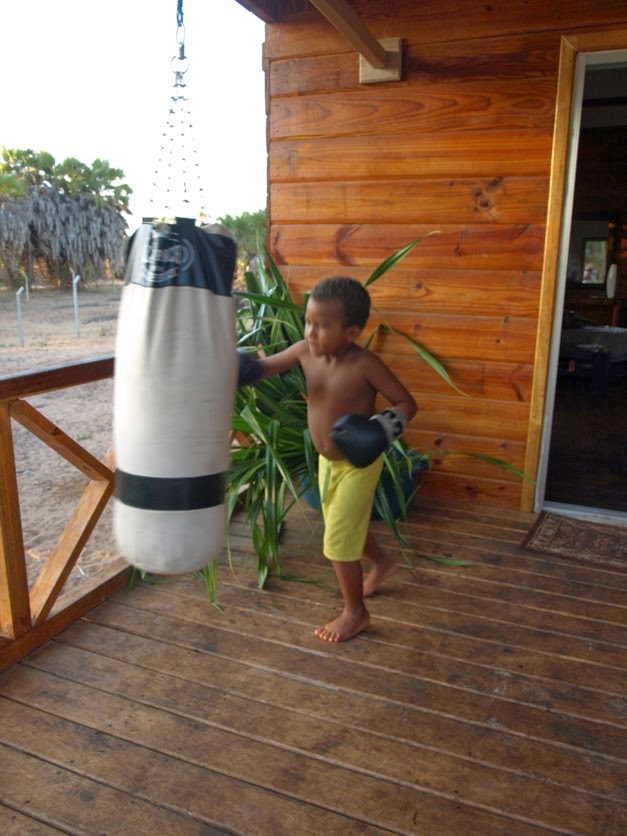 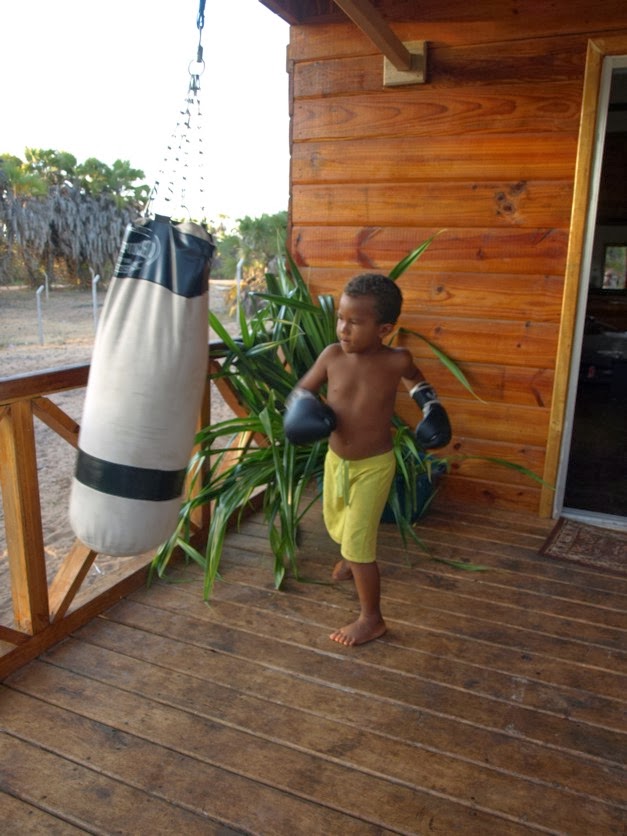 So to answer my original question, when is a boy old enough to learn to box?  I would say, when he wants to.
Posted by Hippo at 01:11