Last night I was stung by a bee.

I can still remember the first time I was stung by a bee, it was while playing in the garden of our house in Viersen so that must have been 47 years ago.  I don't recall the pain, only the fact I hobbled across the lawn shrieking like a girl until Dad caught hold of me and, hoiking my foot in front of my face so I could see my toe better, pointed out how the bee sting was still pulsating, pumping poison into my system.  I was fascinated and horrified at the same time.  I cannot recall ever being bitten by a bee since but always accorded the little blighters plenty of nervous respect.

I think all of us have heard about African Bees, killer bees that swarm around stinging everyone and everything to death.  In documentaries I learned that unlike European bees, African bees will chase a perceived threat for hundreds of yards.  I leant that carbon dioxide in exhaled breath stimulates the sting response.  The film  makers ably demonstrated this by tossing a child's fluffy toy at a swarm who just ignored it.  The next fluffy toy to be tossed in had been fitted with a tube through which CO2 passed.  The bees went berserk and within seconds the toy was buried in a mass if writhing, stinging bees.   Quite clearly the message was, if attacked by killer bees, stop breathing, something I suppose one would, under the circumstances, do quite quickly anyway.  I did witness a mass attack by African bees while clearing mines in Mozambique.  Grown men in absolute panic ran across an uncleared minefield, so frantic were they to escape and so persistent the attack.  That no one was killed, either by bees given their terrible reputation, or by landmines was quite remarkable.

My next close encounter with bees was in Cabinda Province in Angola.  I wanted to buy some wild forest honey and was told where to go and find the Honey Boy.  I found him sitting in his yard surrounded by pots of honey, chunks of beeswax and millions of bees.  Containers of any sort are at a premium in Angola so I had brought with me half a dozen empty 1.5 litre water bottles which he proceeded to fill, honey spilling down the sides of the bottles making them all sticky.  The bees swarmed all over the bottles, him, his hands especially and me.  Any second, I thought, I am going to inhale one of these buggers.  He dropped the bottles into my carrier bag for me and I left with 9 litres of dark honey and half a colony of bees in tow.  Back at camp, I submerged the bottles in a drum of water and tossed the carrier bag before cleaning myself up.  Eventually the bees thinned out and I was allowed back into the communal area.

If what they say about African bees is true, how was it possible that a boy clad only in flip flops and shorts could make a living robbing natural beehives of their honey?

The honey in Angola is the best I have ever tasted.  It is dark, the colour of well brewed tea and, apart from a few bits which float to the top (usually dead bees) is very clear, not at all cloudy.  I make no claims to its properties as a natural anti-biotic but from experience can confirm its efficacy as a salve on tropical ulcers, sceptic insect bites, infected cuts, even snake bites.  Mixed with lemon juice and a bit of hot water, it provides relief for tickly coughs and is, of course, great on pancakes.

With the well I dug, I have access to fresh water and plenty of it gets spilt, notably by the locals collecting their supplies of drinking water and by me when I am watering the beds.  I have placed a plastic bowl under the drain of one of the air-conditioning units so the dogs have a constant supply of clean water with no effort on my part and all this has attracted bees Sir, thousands of 'em.  They come in the evenings, just as the sun is setting and cluster around dripping taps, pools of water, and, if the ice cream machine is in use, its nozzles. I have to keep the kitchen window closed lest they cluster around the kitchen tap or drown in the sink.  I used to drink soft drinks straight out of the can, now I use a glass and insist Alex does the same; in their determination to access fluids, especially sugary fluids, at least one will end up in the drink. 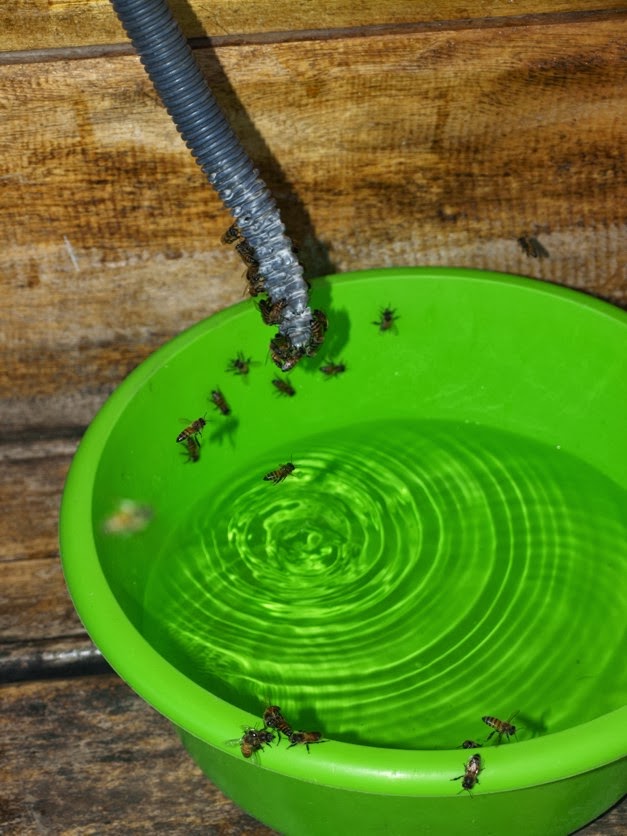 And yet I have never been stung.  When the bees first started coming, I was nervous.  OK, I'll admit it, I was afraid of being stung.  If the bee buzzing me was too insistent, I would move away.  I wouldn't even try to swat or squish it lest I annoyed it and its mates.  Over time, though, I have learnt to ignore them and yesterday was a case in point.  I had left a can of Sumol, a fizzy fruit juice, on my desk and sure enough, the bees located it.  I sat down at my desk to type out some emails and noticed them buzzing around the can and also, confused perhaps by the brightness, crawling over the laptop screen.  I ignored them.  Engrossed in my task, I did not give the tickle on my neck a thought as I absent-mindedly gave it a scratch.  I felt a hot pin prick, no more than that, and my hand came away with a bee between my fingers. I asked Marcia to take a look at my neck and sure enough, sticking in the flesh was a sting which she pulled out.  And that was it,  A momentary irritation, a slight swelling and then nothing to write home about.

So why am I blogging about it?  Well, if that was the sting of the terrifying African Killer Bee, it explains how kids in shorts and flip flops can shin up trees and steal honey.  If kids can get honey, why can't I?  Until I moved here and dug the well, I hardly ever saw a bee let alone loads of them so just assumed the area was far too arid and flowerless for them.  Instead I have found there must be millions of them and if there are lots of bees, there must be lots of honey.  And I like honey.

I am getting bored see, this is the problem.  Time passes very slowly when you are sober and I am running out of things to do and everything that I do do ends up with me having to wait.  I cleaned up the whole garden, have bought a bag of grass seed but must now wait for the rains so the seed takes and grows strong enough and quickly enough to survive the arid season being fed only with water from a hose.  Same thing with my raised beds.  They are all done but again I must wait for the good soaking the rains will bring before planting out all the herb and vegetable seeds I have waiting, unlike me, patiently in my drawer.  I have finished Stalag Luft III but must now wait for the chickens and Quail to be available.  I rarely go down to the other site as there is little I can do there, I just have to be patient and let the Filipino carpenter, who is doing an excellent job, finish the huts but he, in turn, is having to wait for the electrician who thrice has failed to show so I am now looking for another electrician willing to travel this far out of town.  I paid a Chinese contractor to bulldoze the rest of the land flat at the restaurant/lodge site but two things happened: firstly the bulldozer broke down and secondly, the Chinese foreman fell off some scaffolding and fell three floors breaking an awful lot of his little oriental bones and scuffing his yellow skin to hell.  I have to wait until his replacement arrives.

Last night I was stung by a bee and this morning I stumbled across this blog: Brixton's Bounty.  It is entertainingly written by some bloke called Oliver Riley who lives in Grantham, not Brixton, and is a nice mix of gardening, cooking and bees.  Unlike most UK apiaristas, he's gone for a top bar hive, more commonly seen in Africa than Lincolnshire.  Clearly this was a sign from God (or the Devil wishing to find work for idle hands) so I read loads of his posts and then refined it (after learning a sure fire way to make sauerkraut) to all his beekeeping posts.  A very useful guide to Apiary for Dummies.

I have absolutely no idea how to trap a swarm of bees but while I wait for inspiration, I am going to build a top bar hive and put a welcome sign in bee language over the entry hole.  I will make sure the top bars have some beeswax foundation and sprinkle lemon grass oil in there (apparently they like that) and maybe even a bowl of sugar water.

All that will attract bees, no doubt about that but worker bees on their own aren't much good.  What I really need to learn is how to attract a queen.
Posted by Hippo at 17:47