All of you urging me to rush down to the local sawbones and let him cut my lifetime friend away!


John Gray, that delightful Welsh raconteur and explorer of alternative lifestyles mobilised an Army quicker than .  There I was, sat uncomfortably in my sandy mosquito ridden trench, foot elevated on a sandbag trying to write poetry when all of a sudden I was overwhelmed by the Royal Welsh Medical Corps brandishing bandaids sharpened on kerb stones and insisting I reported to the Medical Officer.


I bugged out pretty damn quick, I can tell you.  I may not have been able to hobble as fast as the yoghurt knitters could run but once I was in the trees, they lost pace having to hug each tree they passed (it’s some sort of religion, don’t ask me, they are all Druids) so once they’d spread out a bit, I doubled back through their lines and went home for a cup of tea and a cheese toastie.  They’re still out there now for all I know, there are lots of trees here.


The fever broke last night, one last kit check and I felt fine.  OK, I won’t be playing soccer for a while but since that’s a ’s game, I couldn’t care less.  What kind of sport is it when as soon as you stuff an opponent, some tart blows a whistle?  I lost interest after Vinnie Jones retired.  Similarly, no-one was going to blow a whistle on me.  on Saturday I was faced with a couple of choices.  I think I made the right one.


Now you tell me, doesn’t that look miles better?  I think it does.  I might lose the nail but then again, it was pretty horrible anyway; it would never take varnish and looked awful in Harvey Nick's sandals. 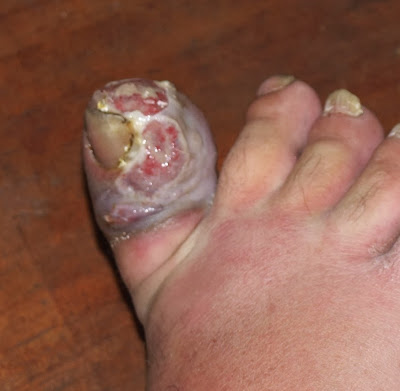