A few perceptive readers noticed that this post appeared, then disappeared.  That was because He-Who-Cannot-Be-Named asked me to take it down.  So I did.  For just a bit until I could, in what is now common parlance, redact it.


There are times when I feel a shade cut off from the rest of the world.  With an internet connection about as useful and effective as two empty bean cans linked by a bit of string (when it is working) idle surfing isn’t really an option for me although I do try to keep up with my favourite blogs and catch up on the news.  Skype?  Forget it although I must confess that a few days ago all the planets must have aligned for not only did I get through to He-Who-Cannot-Be-Named in Germany, he was actually at home (presumably re-supplying for the continuation of his world tour).  Not only that, he had time to chat.  Hours of time in fact.


We have not seen each other in years and have only managed the three or four few day get-togethers in the last decade because he dragged himself down to Angola, invariably exhausted and bewildered by time zones and jet lag and occasionally worryingly traumatised having just left yet another bloody war zone.  Unlike me, he’s not an ex soldier, he’s an engineer and gets embarrassed when, relaxed by a few drinks, he pours it all out and then says things like, ‘I’d like to shoot the fucking lot of them’, meaning, of course, the members of whatever dictatorship were in force in the countries he visited.  Sadly, I know that he couldn’t hit a barn door at two paces with a shovel (or at least know instinctively when to get his flaming head down) so he would be quickly slaughtered, but I do sympathise with the natural instinct to fight against injustice, especially the suffering of the innocent.  He hasn’t had his Jean Claude van Damme moment, thank God, but he did smuggle a lot of film back to the media from places like Libya and .  He does give me sleepless nights.


You would have thought that given the unexpected gift of not only voice, but video too, we would have had loads to discuss.  Having confirmed that our respective family members were all in good health, each of us insisting that bored offspring drag themselves from whatever they really wanted to do to stare into a laptop instead and say ‘Hello He-Who-Cannot-Be-Named’, we dried up.


Then He-Who-Cannot-Be-Named asked me if I had heard that Angharad Rees had died.


I thought for a moment.  ‘You mean Poldark´s wife?’  (Yes I know that is terribly sexist but I was born in the fifties when women knew their only function was to be pregnant, barefoot and in the kitchen)


Bugger.  Now I know that actors and actresses hate to be typecast and that both Angharad Rees and Robin Ellis contributed so much more than just Poldark to the theatrical world but in Poldark, they were a hell of a team.  And that series aired just when He-Who-Cannot-Be-Named and I were in our teens, bodies flushed with hormones and ready to take on the world and all the women in it.

Don’t forget, this was a time when the UK had crawled through four day working weeks, power cuts and Heath, the leader of our nation, so in love with Europe he crashed his boat, Morning Cloud into Belgium missing his intended destination, France, by a whole country.

He-Who-Cannot-Be-Named and I had witnessed bailiffs coming in and lifting anything they fancied out of our house or off its driveway that my father, after 23 years service in the British Army had tried to procure to improve his family’s standard of living.  Soaring inflation, rampant fuel price increases and the loss of overtime as factories slowed production or stopped altogether did for him.  What he couldn’t understand, probably because he had a lifetime of duty and sacrifice behind him, was why his union (yes, he was forced to join one if he wanted a job, this was the Seventies) were also forcing him to strike when he knew it would not only kill the company he worked for but also the source of income he needed to sustain his family.  Our Dad was a Black Leg and received neither pay (because the company went bust) nor any union benefits (because some shitbag communist had decided my Dad was a traitor).

He'd have gone down the pit to feed his family if the Unions had let him.

All he wanted to do was work, something which, as a man, he took pride in.    Both He-Who-Cannot-Be-Named and I did two paper rounds a day and as many odd jobs as we could get from neighbours.  My mother worked all the hours God sent in Smith’s (she was German and got an A Level in English Literature after that which left me wondering how busy Smith’s was during that economic depression) yet still managed to rustle up a family supper.  Heaven for us kids, as the adverts said at the time, was a bowl of Angel’s Delight.


Poldark for us boys, therefore, hit everything on the nail.  You can see the allegory, can’t you?  There’s some poor bastard who has been away serving his country and when he gets back, he’s comprehensively fucked over.


A decade or so ago, there was a survey asking teenagers who they respected the most, who they would most like to be like.  Richard Branson came out tops. I can't argue with that, after all, he started in a garage or loft or somewhere menial flipping vinyl yet ended up taking British Airways on leaving its directors clutching their bruised balls in the Savoy Grill.

If they had asked me in the Seventies who I aspired to the most I would, without hesitation, have said ‘Ross Poldark’.  Here was another man, away for ages in the service of his country (boys do identify with their Fathers) who had been screwed.  Not just by venal authority, but by the very same from whom he could have expected a bit of relief.  And in Poldark’s case, as if it wasn’t already enough, his smart fiancée stabbed him in the back by running off with someone who he really could have assumed to be a mate (as in friend, a rock, rather than in the biblical or zoological sense).  Back then, I didn’t see anyone offering a bit of a bung to my Dad who had to switch his engine off and coast on the downhill stretches to work between Chaseterrace and in order to save petrol.


At the time I wasn’t just brushed gently with a warm glaze of discontent provoked by plastic socialists and lying politicians, I was incandescent with impotent rage.  They could have used me to fire up the power stations solving the country’s energy problems in one go I was so angry at the lot of them.


A normal man would have loaded his pistol, swallowed the last of his port and put a ball through his head, but not Ross Poldark.  And neither did my Dad even though all the paraphernalia required were at his disposal.


Just as my Dad would not have pulled through to respectable success without my Mother, neither would have Ross Poldark without his Demelza,  Not only did I want to be as hard, courageous and decent as Ross Poldark (dreaming that I could get back at some of the bastards who screwed my Dad), I wanted to marry someone like Demelza.  Truth be known, I aspired to be like Robin Ellis and was in love with Angharad Rees.


Her death, untimely and very, very sad, led me to reflect on those times we all sat glued to the television, power cuts permitting, soaking in the superb performances of two actors, two professionals who really were one of the most memorable teams to grace the living rooms of over fifteen million viewers.  Even God had to join the queue as church services were rescheduled to take account of broadcasting times.


I always wanted to emulate Poldark and find my own Demelza.  Clearly I wasn't going to take him on and nick his Missus, he'd spend the rest of his life hunting me down.  As it turned out, I did my years of service overseas and returned to find that my wife had run off with someone I quickly learnt to hate with a vengeance, while the lawyers saw to it I lost everything I had saved up and worked for.  Imagine how you would feel if the man that cuckolded you was living in your house, shagging your wife and, worst of all, insisted that your son called him Dad?


What else is a man to do but fly in the face of a convention that still exists today and marry his maid?

And, despite the occasional Poldarkesque twist in the plot, Marcia and I are doing rather well together.


I am very triste about the death of Angharad Rees but was delighted to discover, as I disconsolately surfed Wikipedia (local Angolan internet service provider permitting) in an attempt to read all I could about such a wonderful actress and childhood sweetheart, that Poldark (I mean Robin Ellis), a real hero for me (some of his most powerful performances were outside Poldark), is still alive and kicking in France and has his own really nice blog.  He has also written books on how to dine well with type 2 diabetes, an all too common affliction, not only in my family.  Once again that old hard case Poldark, I mean Ellis, is influencing my lifestyle.


Sad as I am over the death of Angharad Rees, I am pleased there are people who remember her for what she was, a bloody good actress, delighting millions with her performances and exercising a benign subliminal influence that hopefully she is now aware of. 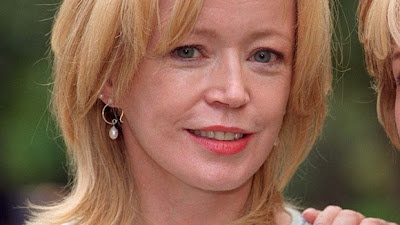 Like I said, I never met her, but I was rather fond of her.