A while back I received an email from an American lady who said she knew me from my blog.  Oh dear, I thought, I am forever poking fun at Americans and occasionally some touchy feely people in soft shoes confuse my rational views on women with misogyny.   I read on.


Nancy had started reading my blog when she learned that her employers were posting her to Angola.  ‘Tis a sad reflection on the dearth of blogs emanating from Angola that she persevered.  Either I failed to paint a bleak picture of life in Angola or her entreaties to be posted anywhere else fell on deaf ears because come here she did.


She was, she informed me, going back to the States soon and wanted to know if there was anything she could bring back for me?  Well how considerate is that?  My first thought was a full service kit and new air-conditioning compressor for the Jeep but she qualified her generosity by excluding ‘heavy Jeep parts’.  If Nancy knew all about my Jeep, clearly she had kept herself up to date with goings on at Fort Hippo.


I wrote a couple of weeks ago about Alex and his boxing gloves.  Before I actually met Nancy, I did not want to explain on my blog exactly how I got them.  It was Nancy who brought them back for me along with his punch bag, a pair of 501 jeans for Dominic, pills for Marcia, loads of seeds for me and, something I was delighted about, a sweet fig tree (Ficus Hardy) .  The original idea was that shortly after her return to Angola, she would come down to Fort Hippo for lunch, bringing the kit with her.  Unlike me, though, she has a real job and work precluded her coming down for a few weeks so she kindly arranged pick up of the goods by Marcia in town.


Nancy had been worried about the fig tree.  It had been posted from Chicago to Texas during the Great Polar Vortex so, unsurprisingly perhaps, on arrival in Texas, all its leaves fell off.  I knew it was a long shot to try and have brought in a potted sapling and find it still alive at the end of a lengthy journey but Nancy administered first aid and lugged what was now little more than a twig extravagantly packaged in a huge box filled with expanded polystyrene beans all the way to Angola, unpacked it and stuck it on her fridge.  It does not look good, she told me in an email.  I was sad.  There are no sweet fig trees here in Angola as far as I know.  What they call figs here are nasty hard green little things, bitter as hell and more stone than edible fruit.  Monkeys love them apparently but I don’t.  I was convinced sweet figs, originally from the Mediterranean, would flourish in this environment.  They are hardy and drought tolerant and they grow fast; saplings bear fruit within two years.  I know that normally one plants trees for one’s grandchildren but with a fig tree, I stood a good chance of enjoying the fruits of my labour.


The day before Marcia made the pick up, Nancy called me, ‘The fig tree is sprouting two leaves!’  Clearly Nancy wanted the little well-travelled sapling to live too and it had responded to all that love for it Nancy had been emanating around her apartment.


First thing I did when I unpacked it was give it a drink of water and let it get a breath of fresh air on the veranda.  The next day I carefully repotted it in my special mixture of dark soil, fine wood shavings and goat poo. 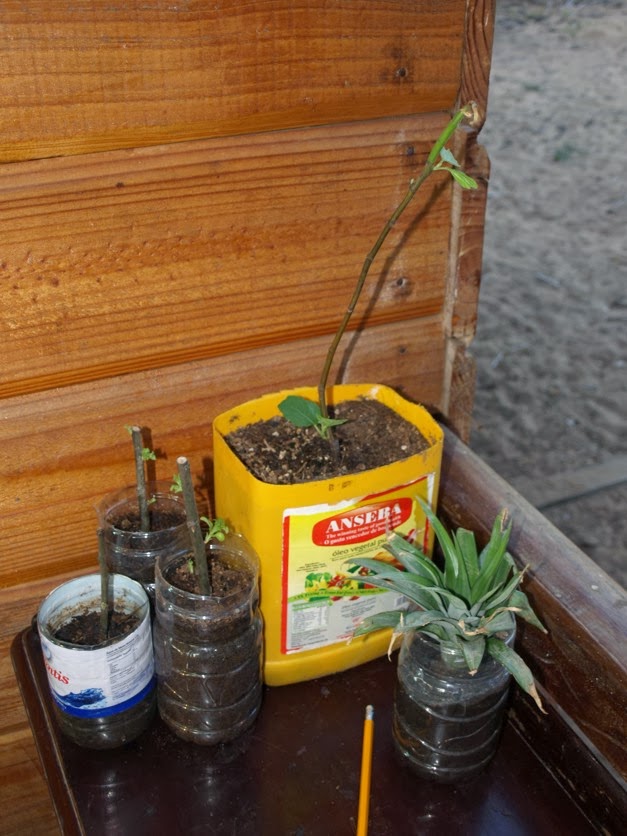 Where it has done rather well: 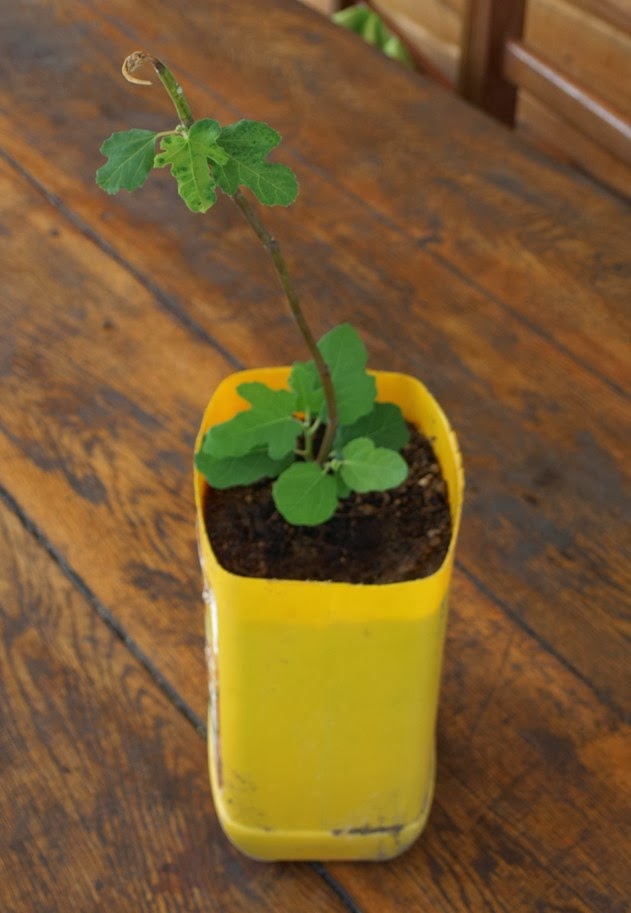 Finally Nancy was able to visit and brought with her three friends, Rae Anne, Don and José.  Naturally I decided that rather than boring old steak or chicken, I would give them a seafood treat so it was lobsters, fish and clams.  Marcia prepares the best clams in the world; even the juices left in the pan make for a delicious soup.  Marcia is paranoid about her clams having any traces of sand in them so actually lugged gallons of sea water to the house in which she left the clams overnight changing the water twice.  Her effort paid off, they were delicious.  All I did was prepare the lobster.  Not really hard work, all I had to do was drop them a few at a time into a heavy pan of boiling water. 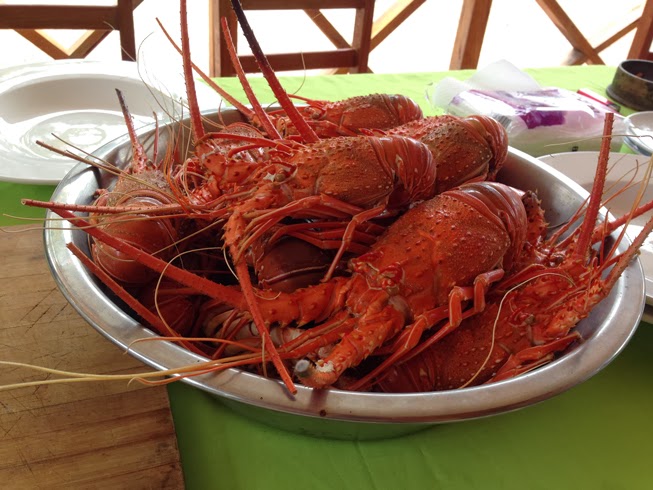 Naturally, Alex had to be the centre of attention so started performing...

Rae Anne and Don are very musical.  They have their own band, one which they pulled together here in Angola.  It is called ‘ThirteenthFloor’.  That’s a cool name for a band so I asked them how they came upon it.  ‘Because we live on the thirteenth floor’ they said.  Fair enough.  It is still bloody cool, though.  Nancy lives on the tenth floor of the same apartment block so I suggested that if she started a band, she could call it ‘Three Floors Down’.  That’s a cool name too.


I told Rae Anne that Alex had a guitar, a cheap old Chinese job I had bought Dominic years ago.  He was never interested so the thing had been knocked and bashed around and had never been tuned.  I brought it out and together, Rae Anne and Don tuned it.  Don had an app on his phone I noticed.  The app would play a note, Don would hum it and Rae Anne would tension the strings.  Bugger me if it didn’t play!  So we were treated to some songs, all of which I liked.  Sat there in the middle of nowhere surrounded by palm trees I said we all looked like a bunch of aid workers enjoying themselves, the only difference being we weren’t driving top of the range Landcruisers or smoking joints.  It was all very Woodstock.


Rae Anne had delighted us by bringing half a dozen of her world famous scones.  Who says scones have to be boring?  Rae Anne bakes many flavours, exotic in their excess.  Our scones were Cranberry Lemon and Blueberry White Chocolate.  Alex scoffed one immediately and then tucked into another half which Marcia finished off.  That left four.  After they all left, I tidied up the dishes and then just had to have a bite.  As soon as the pastry hit my palate, I was transported back to the West Country.  There was only one way to finish off Rae Anne’s scone and that was with a decent cup of tea.  Not any old tea brewed in a mug, but Zimbabwean tea brewed in a warmed pot and served in bone china tea cups.  I laid everything out, switched on Alex's favourite TV channel and together we had a proper English tea with scones.  That left two.  One went into Alex’s school lunch box the following morning.  That left one.  All day it called to me but I resisted.  Alex arrived home and there in the middle of the table was a plate with one scone on it.  'Is that for me, Daddy?' asked Alex.  'I saved it for you Son.'  'Thanks Daddy!' he said swiping it.  All is not lost, though, for Rae Anne makes scones to order or sells the dough so traditional cream teas will become a feature at Fort Hippo’s.  Those living in Aberdeen, Pinehurst or Southern Pines in North Carolina (I think that is somewhere deep in the backwoods of one of the ex-colonies), can have their scones delivered from Pine Scones where Rae Anne’s team of dedicated professional sconierres is hard at work in her absence.


Nancy too has talents beyond finding hydrocarbons for her employers so they can extract, refine and sell it.  Nancy made the shirt José was wearing and was half way through making a dress for Rae Anne.  My shirt making ability is limited to cutting three holes for head and arms in a gunny sack.


It was a lovely day, all the more remarkable as I only got to meet these nice people through my blog.  You know how parting with, ‘we must do this again sometime soon’ can be laced with insincerity?  Well I was absolutely sincere when I suggested that.  Next time we will go for a walk down the beach, hopefully when Dominic is here as he knows where to dig up fossils and can identify all the varied birdlife.


Nancy, by the way, not only brought me the seeds I had asked for, she also brought me a load of drought resistant flower seeds to, as she said, ‘brighten up the garden and attract butterflies and bees’.


Like I said, how nice and considerate was that?
Posted by Hippo at 16:40