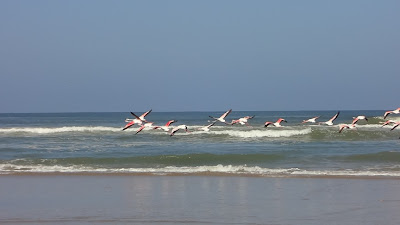 Most of you will know that my neighbor and I have had a pretty rocky relationship.  Both of us are exactly the same age but Rico seems to have played the cards he was dealt better. To be fair, business is a Dog Eat Dog environment and we all strive to do the best for ourselves so we can look after our families and any altruism thereafter is the balance of the excess.

Rico has other fishing lodges apart from the one bordering my property at the Barro de Kwanza and he put his eldest son in charge of the Flamingo Lodge down south in Namibe.  I can think of nothing nicer for a father than setting up a business and then slowly handing the reins over to his son, after all, that's what keeps me motivated.  Fat Hippo's isn't for me, it's for my boys.

I met Raimundo a couple of months ago along with his very charming German speaking wife (I guessed she was from Namibia).  They were discussing menus (the food in Rico's place here is, well, basic) and I looked at this young, strapping lad and his attractive wife and thought, 'I'm in for some real competition here',  Still, food is food.  I love eating it and I love cooking it even more so, like a moth drawn to flame, I had to sit down with them, listen to their menu ideas and venture a few of my own.  Naturally I knew the best places around here to get supplies.  So I shared those with them.  Yes I have a truck and would happily let them use it to do a joint supply run.  I had the temerity to point out that some of the ingredients necessary to perfect that particular dish on their menu might be hard to come by so suggested alternatives.  Yes they were competition, serious competition but I liked them.

A couple of days ago Nice Paul left here to take over at Flamingo so that Raimundo could come up here and sort out Rico's Kwanza Lodge.  Marcia, who is so disconcertingly fond of Nice Paul I might get round to mentioning it to them one day, merely as a matter of form, extracted a promise from him before departure that he should call or send a message confirming his safe arrival.

Paul's message this morning was brief and to the point informing us that Raimundo had just died of a heart attack.

Bloody hell.  Everything that Rico had fought for, all his success.  Like me, Rico doesn't waste his mony on designer suits, watches or trinkets, it was all for his son.

God preserve any parent from the agony of having to bury their own child.  And God give Rico the strength not to bury his ambition and raison d'etre alongside his boy.