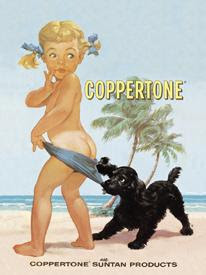 I am not much in the mood for writing. I spent all last night alternatively shivering and sweating myself through another bout of Malaria and, of course, I had forgotten to get in a resupply of Sulphate of Quinine after the last episode a couple of months back so I just had to chew on the pillow and be brave. Marcia was very considerate and with all the tossing and turning, the groaning and the staccato rattle of chattering teeth, she asked me if I might not be more comfortable on the sofa instead of the matrimonial bed. To cap it all, I had to make a sudden dash to the toilet and fell arse over tit in the dark when I tripped up over Three who with inexplicable loyalty, insists on sleeping on my doorstep. All in all, last night was the pits and I hardly feel any better today. Even my whisky tastes foul. That’s how bad it is.


Still, the work must go on. Now that the carpenters are here I cannot let a mere lethal disease stand in the way of progress. Pflicht is Pflicht and Dienst is Dienst so regardless that today is a communist worker’s paradise holiday, I dragged myself out there. If the lads were giving up a day getting smashed on the beach, it was the least I could do. 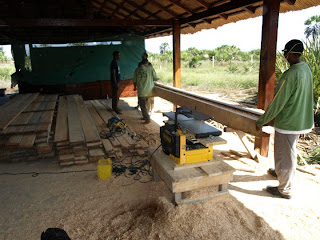 After days of seemingly just restacking and shuffling wood around, Robin the Filipino carpenter is really getting stuck in. His reorganisation was designed to create for himself an efficient working area and, judging by the speed he is planing and shaping the timber, it was worth the effort and I am starting to believe him when he says he’ll have the first two buildings up in six weeks. Now I know that even by geological time frames that is way behind schedule but if he can achieve it, I might just forgive his boss. Even Marcia has stopped giving me the most merciless hard time for employing a mate to do the job, compounding the error by paying him up front, and if I wait until about 2 am when she is really fast asleep, I can crawl into bed with her. So long as I don’t have malaria, of course.

Considering that Robin is working all this timber essentially by hand, I was very impressed with the pile of wood panels he had finished by lunchtime. The buildings will be double skinned and with the thickness of the panels, they will be all but bullet proof. They will be substantial structures and if the sea gets really nasty again, then at least I will be able to paddle away in my own Noah’s Arks. 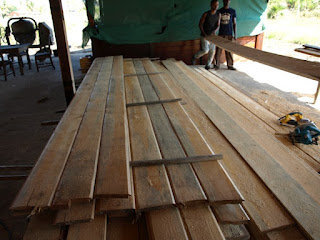 I have one of these touch pads on my laptop, by the way. I hate them, much preferring a mouse but I agree that they save space. But with sweat pouring off me like a thrashed horse, I seem to be shorting it out or something so keep having to wring my hands dry with a towel and then when I wipe the touch pad, it does select all, delete in one single sweep. Like I say, it’s not really my day today.

There has been an entertaining exchange of comments on a few of my recent posts not least those regarding the name of my enterprise. One suggestion for the sport fishing bit was ‘Gobber’s Shark Expeditions’. Now I realise that this remark was made with all flippancy (although cleverly alluding to my nickname at Sandhurst) but once I started to think about it, it wasn’t as daft as it first appeared. Then I thought about the name of the business, Flordita. It was supposed to be Floridita, in honour of Hemingway’s favourite watering hole in Havana but a typo by the licencing authority in Angola meant it lost a ‘i’ and would henceforth and forever be Flordita.

Now that sounds very ‘twee’. It gives more an impression of sombre moods, maitre d’s, sommeliers, hors d’oeuvres and amuse bouches than a rip roaring grill restaurant and bar with scantily clad waitresses and even scantier clad sport fishermen swinging from the rafters and chugging beers. Clearly then, while Flordita would be an admirable name for the big a la carte restaurant I will build, for the grill and bar, it is a toss name. Now that Chris over on Grow, Fish, Eat had me going, I got to thinking and decided that ‘Fat Hippo’s’ would be an excellent name. Think about it. There you are a roughy toughy oil worker on shore leave and with cash burning a hole in your pocket and someone asks you where you are going for the weekend. Would you rather say, ‘Well, actually darling, I thought I might spend a quiet evening dining at Flordita’, or would you rather say, ‘I am going to get blitzed at Fat Hippo’s, shag the new waitress and then go fishing at Gobber’s’?

Chris has kindly said he will think about a logo. Between bouts of shivering, sweating and chundering, I’ve been thinking about it too. Does anyone remember the old Coppertone sunscreen adverts which showed a little girl having her bikini bottom peeled off by a puppy revealing her tan lines? Well how about a modern version of that but with a busty beauty suspended by her bikini bottom, revealing a nice bit of pert botty, on the tooth of a grinning fat hippo? Now that’s the sort of class logo I think speaks volumes for the quality of my joint: