I guess it is a cultural thing

Having given away in a recent post that I am well into a fiction based on fact novel set in Belize, I think most of you are aware of the fondness I have for the place.

Several times I searched for any decent blogs from Belize but all I could turn up were the sort written by retirees living in log huts in Cayo district which, while I had the most enormous respect for authors with balls enough to try and make a go of it, were hardly reminiscent of the Belize I knew, an altogether rather more lively place. I only ever went up to Cayo to dig around in Mayan ruins to see if I could find any jade pieces and most times never made it even that far along the Western Highway, preferring to stop off at Big Falls, an abandoned rice station, with a five shot semi automatic Browning 12 bore to blow some wild fowl away. Apart from dropping ducks, I really enjoyed sport fishing and diving and for that I needed the crystal blue waters of the Caribbean, the beach bars and restaurants being a welcome diversion.

Finally I found one, the San Pedro Scoop. It is written by an ex Lehman’s employee (I know, ex Lehman’s and living la dolce vita in the Caribbean, but I am sure many of the rank and file were left with no other choice than accepting a sudden lifestyle change or a long walk out through a twentieth storey office window). Her blog is worth it for the photography alone. San Pedro is by no means the only beautiful place in Belize but it is right up there and the San Pedro Scoop really does give the reader a flavour of what it is all about, almost literally when you see some of the food on offer.

In a recent post, “Sailing on San Pedro’s Rum Punch II”, she described a trip on a classic wooden sailing boat, now run more for casual days out over the reef for keen snorkellers and epicureans than serious fishing. Naturally, there was plenty of fresh sea food and booze on board (otherwise, why would anyone want to pay for a bumpy ride through the surf in the first place?) and once again the narrative and photography were mouth watering. All I can say to her is that now I have found her site, she needs to do a quick deal with the Belizean tourist board and claim a percentage of revenue generated from Angolan tourists because the sudden spike now I am showing her site to everyone I know here will have all been down to her. If she is really switched on she needs to quickly set up a legal platform to assist these rather affluent individuals acquire similar chunks of paradise and park the revenue from oil and diamond deals into the safe haven that the Belizean banking system currently profess to offer.

The first comment she had for this lovely post was one complaining that because ten days before she posted someone had drowned for reasons unknown, she should not have written an article in which booze, boats and women were so closely connected. Crickey. People drown all the time. Of course it is sad. I only knew that someone had taken that final dive on my bit of the river and had washed up on the beach because the police came to me asking if my shop sold batteries for their camera. This was yesterday, I had just shot my dog and wasn’t thinking that well so I said no, but I had my own fully charged camera I could lend them. The camera is now evidence so, realistically, I will never see it again. Now this pisses me off more than the history of the body dragged off my beach especially when the police pathologist took one look at this sodden corpse and said, ‘Yeah, skunked and fell off his boat’.

Naturally, I was bloody annoyed and as a certifiable witness getting back to my very busy shop I was grilled by all the rubber neckers that the police no cross lines had diverted to my coolers filled with beer. The shop was packed.

‘You saw the body?’ was the general enquiry.

‘Yes I did. His throat was sliced through from ear to ear and he had two bullet wounds in his back’,

I paused for effect,

‘The police have decided it was suicide’ I finished.

I grabbed a cold one from the freezer and stalked out of the shop but not quick enough to avoid hearing Marcia say, ‘It is English humour, he doesn’t like seeing dead bodies’.

German humour, darling and no dear, what I don’t like is losing yet another bloody camera all because some besoffene Arschloch got smashed and fell off his boat and was then inconsiderate enough to wash up on my Strand. And I bet the rozzers are drinking for free. The thing that really pissed me off, though, was that the uniformed Criminal Investigation police all pulled on surgeon’s gloves but were then very reluctant to get their boots wet so finally I just waded in and dragged the bastard out, after all, if rats and cockroaches can close a restaurant down, imagine what a putrefying corpse would do for business.

I got back to my room and could not find the church key so had to bite the top off my cold bottle of Charlie and then I remembered another San Pedro Scoop Post, ‘Monday Night at Average Joe’s (AJ’s) Blues bar’. Never mind listening to Blues on a Caribbean beach which, at my age, is seriously better than sex, just check out the beer bottle opening rings, I posted a comment saying these were a must have but I never received a reply. Being ex Lehman’s and safe in paradise, I guess she isn’t going to get out of bed for a deal worth less than a million but I really would have liked a box full of those rings.

As I was trying to chew the top off a Carlsberg bottle I noticed that Nice Paul must have come by while I was wrangling the body out of the river because there was the latest edition of Ski-Boat from South Africa lying on my laptop keyboard.

I went for the boat adverts first and then scanned the mag for anything else that might be interesting. It has bugger all to do with water skiing and miles more to do with sport fishing in all the exotic places in Africa. It is brilliant. Then I saw the advert that ties all this shit in together, me finding the best blog about Belize, the comment beasting the lady author because she posted about a trip mixing booze and snorkelling and me dragging a dead drunk off my beach.

This is what Yamaha South Africa think about all that yoghurt knitting touchy feely stuff about Rum and Water not mixing and the exploitation of women as printed in the April 2012 edition of Ski-Boat: 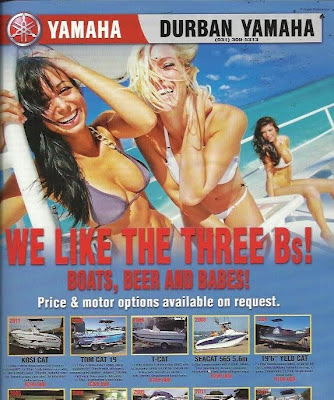