Cecil B DeMille I am not... 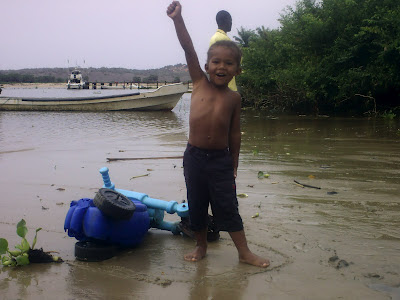 Alex can't believe how much fun this all is

We are starting to identify a few ‘regulars’; people who seem happy to patronise our humble premises more than just once. One of them is a Cuban engineer who is busy building some houses across the other side of the village. He misses his family who are back in Cuba and has taken quite a shine to Alex who in turn, adores him.

He pitched up today and started flashing a video camera. This thing was no larger than a couple of packets of fags so I was intrigued. He took a couple of photos with it and we downloaded them onto my laptop. Not bad.

I was really disappointed when my camera was pinched a few months ago and more so once I moved down here as I really would like to record the before, during and after pictures of the build here. So I said to him, ‘Give us a cabby!’ and nicked his camera so that I could video the site as it is now.

I have never made a video in my life and had absolutely no idea what to do once I had transferred the files, for although I thought I had shot one movie, this apparently translated to millions of files on my computer, none of which would play in Windows media player. So I tried to import them into Windows movie maker only to be told there were codecs missing. WTF are they? I was annoyed but not surprised, I have long since ceased to be taken in by Microsoft marketing hype claiming that everything is seamless on their platform. We all know it is crap and is the fundamental reason that even though you pay to have a system professionally installed, your ageing Mother is still unable to send a simple frigging email which is why you do not know if she is alive or dead.

Now, I do not know what you are like but this sort of thing effing irritates me. Common sense says I should leave this until the morning, take it easy and work through it logically. Bugger that. I WILL post a video, my first one, even though it may be unscripted crap and camera shake has all my viewers spewing with sea sickness. So I went onto the interweb and downloaded a promising looking programme that said even a moron can make and upload a video. ‘That’s the one for me’ I thought. 140 odd mega bytes and a couple of hours later I had it installed.

Just two things. First, it turned 30 Mbs of video files into Giga Bytes. Secondly it said that unless I paid them a squillion dollars it would stamp a watermark in the middle of the video, which it duly proceeded to do. Still I refused to give up. I can live with the watermark, as I hope you can for the time being, but I needed to get the file size down if I were to have any chance of uploading it via the bean can and string internet system I have here. So I downloaded another programme and got the file down to just under 20 Mbs.

So, Ladies and gentlemen, my first ever video, wholly unscripted as it was a very spur of the moment thing, lousy camera handling, awful aperture control, you name it I did it wrong. This is a crap film shot this afternoon at the Barra de Kwanza. Please excuse the watermark in the middle of the screen, please excuse everything but at least it gives you an idea of where this madman has washed up.


Maybe Chris over at Grow Fish Eat could give me some advice...
Posted by Hippo at 23:12