Yo Yo's for the Troops?

Albert Rasch, author of a blog I follow, The Rasch Outdoor Chronicles has clearly been spending far too much of his time in the Afghani sun. Either that or he has gone stir crazy. An obsessive recluse, the sort of withdrawn individual that spends all his time training a pet cockroach to do somersaults.

With Raschman, it all started when he found a broken Yo Yo lying in the desert sand. Only a born and bred outdoorsman would have thought to deploy to Afghanistan with everything needed to fix a broken Yo Yo.

You might imagine that the sight of a rugged mountain man playing with a Yo Yo in a war zone would have resulted in the hasty medical repatriation the mentalist was obviously going for but no. The first to stumble upon this weird scene paused to watch and then had a go themselves. Now, instead of turning as much ordnance into scrap as possible, our steely heroes are ‘walking the dog’ and ‘rocking the cradle’.

Raschman’s most recent post, Yo Yo’s for the Troops, has reminded me of what it was like to be on call all the time, never knowing what was going to happen when the call came. Life for the troops really is long periods of boredom laced with trepidation interspersed with really scary shit. They are all roughy toughy hard men but deep down, we are all fun loving kids at heart. Something as innocent as a Yo Yo in an environment as brutal and tragic as Afghanistan just has to be a welcome sanity saving distraction. 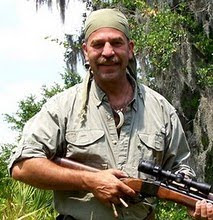 Albert A Rasch, Afghan Yo Yo Champ

So Rasch isn’t as mad as a hatter after all. His idea is for as many people as possible to send a Yo Yo out to the troops. Maybe a few of them would fall into the hands of local kids. No bad thing. In the First World war, they had a Christmas day ceasefire for an impromptu football match (at least the Germans won something) so maybe we can call a halt for the Yo Yo International? At the very least it would be good for Hearts and Minds; those of our troops and maybe those of the locals too.

So, daft as it sounds, there is logic to Rasch’s lunacy so please, read his post and send a Yo Yo to him. It won’t cost much as the postage to forces post offices is subsidised. It’s a tiny individual contribution but will make a big difference.

If he starts banging on about Hula Hoops though, I will send over the men in white coats.

A Yo Yo, for those of you who don't remember. This one, apparently, is a 'Duncan Butterfly'. Gosh! But is it bullet proof?
Posted by Hippo at 13:10