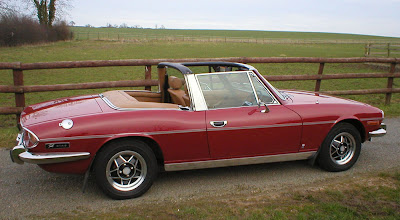 I have on my desk some papers from the bank. They were delivered today and are mine. The fact that they are now with me also means my house is exactly that. Mine.

As a result, two standing orders I have kept up for 25 years, one to the bank and one to my insurance company, have ceased. In a couple of weeks, I shall be 48 years old. Now I think that this happy coincidence merits a bit of a celebration and a healthy dose of self-indulgence. If, like me, a new car springs to mind as an obvious solution then, unless you are completely happy with the legislation choked designs on offer today, no new car readily springs to mind. For a start, they all look pretty much the same, drive the same, and cost a small fortune. Is it an Aston, or a Ford? A Bentley or a VW? It is a credit to the designers and manufacturers that they have, in spite of the Nanny State, managed to maintain any kind of brand identity at all. Today’s cars are miles better and much safer than they were and so much more efficient. And green too.

Well so is my Dyson vacuum cleaner. It is efficient, expensive, this year's must have but no-one could call it sexy. It is a tool and, despite the marketing hype, so are most cars nowadays. The rest are fashion accessories. There are many who would not agree with me but the spirit of indulgence I grant myself gives me licence to be a grumpy old sod. I cannot think of one new car that could excite me enough to make me go out and buy it.

I owned my last Stag in the early 80's when I was serving with the British Army in Germany. It only let me down a few times, usually points closing up over long journeys and only once seriously when the plastic fan split and took a trip through the radiator. But when it was running, which it mostly did, it was the sexiest car on earth. It was never officially imported to Germany so few onlookers had any idea what it was. There were, however, no shortage of willing passengers. I don't wish to be sexist so will not go into the selection criteria I used but I was rarely alone. Cruising along the banks of the Rhine with Dave Brubeck's 'Take Five'oozing out of the speakers and that sensational exhaust note reflected in the narrow streets was a seminal experience

My gipsy lifestyle since has never allowed me to consider buying one again and to be honest, I had completely forgotten about them until now. Considering where I live at the moment, my friends are confident I have finally taken leave of my senses by considering one again.

There will be purists among you who will be horrified at what I propose but please, bear with me. The Stag was a much-maligned car, its quick descent into relative obscurity more the fault of 70's British management than the concept itself and certainly not because of the glorious Michelotti design. No-one in Angola has ever heard of, let alone seen a Stag. In a country rich with oil and diamonds, the elite and emergent middle classes are keen to enjoy themselves now that the long running civil war is finally over. The sight of the latest top spec BMW, Mercedes or Porsche Cayenne feeling its way through the potholes is no longer so unusual. Kids run around on expensive quad bikes and youths pull wheelies on the latest motorcycle exotica. It is all extraordinarily tasteless.

I was intrigued, therefore, when my Angolan driver spotted in amongst the photos I happened to be sorting out, a picture of my old Stag and was clearly impressed. I think he assumed it was some new and exciting sports car, the sort of luxury carriage that every overpaid expatriate has waiting at home for him. Being only a few years old at the time the photo was taken, the car looked immaculate as, indeed it was. God only knows what has happened to it in the intervening 25 years. The thing is, though, untainted by any pre conceived notions or snobbery and ignorant of the model’s history, he just looked at the photo of a pristine Stag and said, ‘Wow!’ 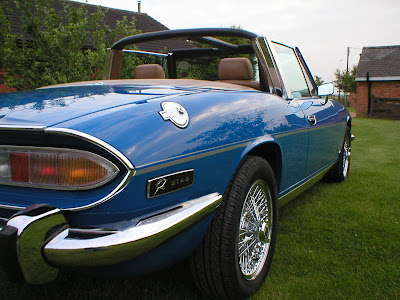 That evening, I surfed the web a bit and came across the site for Spring Grange Classics in Leicestershire. The following morning, armed with photographs of immaculate Stags culled from their site and a reawakened interest for the car, I pulled in a few more of my Angolan employees and asked them what they thought. To a man, they were impressed. One even went so far as to say that if I parked it outside Miami Beach (a very trendy beach bar and restaurant in Luanda where all the beautiful people go), I would end up walking home having been unable to resist the best of the undoubtedly numerous cash offers I would receive for it. My girlfriend, cosmopolitan and Belgium educated, dismissed it saying that she did not like old cars. So her opinion doesn’t count.

I could buy a restored Stag and import it to this country but its life span would be shorter than that of Jeremy Clarkson should he foolishly ever return to Alabama. Low octane fuel, boiling temperatures, choking traffic and road surfaces reminiscent of the moon in places, the car in its original specification would quickly expire. And I am sure that Stag cognoscenti would not thank me for ordering one of these rare cars into the field of battle that is Angolan traffic, for once here any expatriates, human or especially automotive, that die in the line of duty are buried where they fall. There would be no body bag big enough to repatriate a Stag’s remains. Its listing on the Triumph Stag register as MIA Angola would be its only memorial.

Clearly then, there would have to be method in my madness. The original engine, despite all the experience gained by specialists over the years, would never do for Angola. Suspension and brakes would need sorting; no low-slung silencer would survive the first pothole. Air conditioning would be essential. In this country the top only comes down in winter when it is dry and the sun is less likely to toast you to a crisp. In summer with all the heat, rain and humidity, without aircon you would steam like a breakfast kipper. Finally, no right hand drive car can be registered here so it would have to be left hand drive.

When the serious deficiencies of early Stag engines became apparent, desperate owners resorted to some pretty extreme measures to make the things reliable, one of which was the Rover V8 conversion. Now I remember some really horrible installations, Heath Robinson wiring and bloody great humps fibre-glassed onto bonnets completely destroying the svelte lines of the original design. Many would argue, with some justification, that if Triumph management had not been so parochial, this was the engine that the Stag would have had. Some further research turned up a specialist, RPI Engineering, who can supply brand new V8’s ‘ready to run’ and do exotic carbon fibre intake plenums. If they can squeeze 5.0 litres of motor along with all its intake systems under the bonnet of a Morgan sports car without chopping and welding the hell out of it, then they could most certainly fit one under the bonnet line of a Stag. Then I discovered a firm in Northampton that do BMW sourced limited slip differentials, subframes and disk braked hubs with appropriately upgraded suspension, ‘and how about a nice BMW automatic gearbox to bolt to the back of your Rover V8? A wise choice, Sir’.

I would like to have the interior refurbished in leather. No problem, there are countless specialists out there who can supply everything, all of it matching the colour of my choice. I am sure that Spring Grange could re-spray the body any colour I chose.

I was amazed. So few were produced, goodness knows how many are left on the road, yet there is a whole industry out there supporting the model. The only thing that I could not find, and I have to admit I only considered looking for this extremely unnecessary luxury as I was so flushed with my success thus far, was a kit to power the soft top. Even so, I would not be surprised to hear that someone has already found a way to do it.

Now I have written to Spring Grange Classics about this and will take their advice (and would be grateful for anybody else’s advice). Recognising that they will need to do a bit of careful and time-consuming research I have actually asked them to provide me with a quotation for producing the quotation to build the thing, if you see what I mean. The specification that I suggested, briefly, is as follows:

There may be, as I suggested at the beginning, a few howls of protest from the purists but I will get the car that I want. I will take a Stag and I will make it fit, not just for my purpose but for the environment in which it will operate. Think of it as one of those works rally cars that were chopped and modified so that they could compete under harsh conditions and are now so much more valuable than their ordinary equivalents. It will cost me the larger part of a Bentley Continental but I can assure you that I will look less of an ass driving into the embassy car park in a pristine Stag than I would do in something as tacky as the new Bentley. To be truthful, I might actually get to park in the embassy car park rather than having to tell my driver to keep driving my Isuzu 4WD round the block until the ambassador’s cocktail party finishes lest he actually sees me riding in the heap (thinking about it, I might tell Spring Grange to stick a couple of patriotic Union Flags on the wings of the Stag, that ought to clinch the deal). Never mind what the ambassador might think, although we should all give His Excellency’s opinions the grave respect they are due, I can’t wait to see the reaction at Miami Beach. Maybe Britain can once again export the best luxury Grand Tourer it ever produced nearly 30 years after production ground to its final, frustrating conclusion.

The thing is, I cannot be the only one who has suddenly discovered disposable income and now dances gaily down insanity beach. How many others are there like me, completely uninspired by today’s automotive designs and their faux retro offerings? Big car corporation marketing executives, take note.

I have come round to keeping the Stag as original looking as possible so the colour will be Carmine Red with a beige leather interior.
Posted by Hippo at 02:03