The Red Cross parcel arrived from Germany yesterday, this time breaking all records; collected from the DHL drop off point at Homebase in Colchester on the Monday, and being customs cleared and available for pick up from the DHL Express offices in Luanda by Thursday lunchtime.


‘Colchester?’ I hear you ask, ‘But you said the parcel was from Germany…’


Correct, but I am not counting the few days the parcel took to get from Germany to Colchester.  This period was, in military terms, prior to H Hour and was merely the time taken to move to the start line.


The parcel consisted of items sent from Germany consolidated with a few items sourced in UK, the bits needed to repair Alex’s bike.  The latter items were ordered through Amazon and I paid for the fastest delivery means possible.  In the meantime, the goods from Germany were sent by normal parcel post.  The Amazon express package arrived a full three days after the parcel from Germany.


I really was looking forward (or blinking myopically forward) to the arrival of this parcel.  In it were creams and body lotions for Marcia, telephone batteries and chargers, a much higher capacity hard drive and faster memory for my creaking laptop, Alex’s Bastard Schweinsteiger football kit and, most important of all, my new spectacles.  With these I will be able to see Marcia smear herself with cream and then, as the label seems to promise, watch her vanish.  With these I stand a chance of connecting a toe with Alex’s bouncing football, and will be able to type faster and more surely on the laptop I can now see well enough to repair.


Acquiring my new spectacles was an exercise in dogged determination.  I shan’t bore you again with the truly terrible service I endured at Vision Express last June, suffice to say that all I came away with back then was high blood pressure  a wallet twenty-five pounds the lighter and a prescription.


At least armed with a ‘script, I thought, I could ask any optician anywhere to knock me up a couple of pairs of spectacles, one for reading and another for long distance (I would like to regain my confidence behind the wheel of a car).  Well it wasn’t as easy as that.  None were willing to make up a pair without first having measured me up.  It seems obvious now, but at the time was as clear as my age degenerated vision, that we all have different shaped and sized heads.  Some people’s eyes are close together (so are more likely to become politicians) while others, like me, have a skull spacious enough to accommodate eyes further apart.  Naturally, for me to benefit fully from the refractive properties of machined and polished glass, the lenses should sit centred on my pupils.


After a visit to his optician, my brother sent me instructions for determining my own pupil distance.  Visually impaired as I was, I could nevertheless see the flaw in this method; I would require a competent assistant.  Basically, the technique involved me placing two dining chairs facing each other a couple of feet apart.  I was to sit on one, wearing my existing spectacles, while my assistant, armed with a felt tipped pen, sat on the other.  I would then stare fixedly into one eye of the assistant while the assistant marked the centre of my pupil on the lens of my spectacles.  I would then fix my gaze on my assistant’s other eye and the relative position of my other pupil would be marked.  Accuracy to with 0,5 of a millimetre was required.


Marcia and I quickly realized that all sorts of variables could significantly affect the result; if she moved her head would be the most obvious example.  You try accurately marking a dot on a slippery lens at arm’s length without moving your head; don’t forget, the hand holding the pen will always impede the view.  But there were more subtle factors affecting the accuracy of any measurement taken in this manner.  One’s pupils move closer or further apart depending on the distance of the object on which one focusses, and this effect is more dramatic at shorter ranges (call to mind, if you please, the image of someone trying to thread a needle).


We each have a ‘master’ eye (any marksman knows that) so unless Marcia closes the eye not opposite the eye of mine being marked, her master eye will take over and distort the measurement.


This whole exercise proved fruitless, not least because the results of many tries were consistent only in their variety and while at best only giving a poor indication of how far apart my pupils are, was absolutely useless at determining the distance of each pupil from the centre of the bridge of the nose.  I don’t know about you but my nose, sadly, does not lie along the centreline of my face and the spectacles I was wearing had not been made for me, they had been randomly plucked off a shelf in Johannesburg and sent to me so God knows where they sat on my face.  My current spectacles were a disaster and I had no wish to replicate them.


Again, it was Micky who came to the rescue.  He found a German website from which, armed with a ‘script, one could order spectacles.  Brille24.de provides an accurate to scale template which its clients can print off, cut out, balance on their noses and read the relevant pupil distances.  Not only that, clients can use their web camera to upload an image of themselves which the site software then uses to superimpose any of the great variety of frames available.  Alex and I played for hours trying to find the most outrageous looks.  It was a much nicer shopping experience than Vision Rush-to-Wait and, get this, miles cheaper than even the cheapest tat on the racks of any shopping centre ‘Glasses for the Workers’ outlet.  In spite of having an appointment with Vision Express, I had over an hour to kill while I waited for them to get round to me; I had ample opportunity to browse their stock of cheap frames.  They were exactly that, cheap in the worst sense of the word, along with a good dose of very nasty.  Had they the right lenses in stock, I would not have got away with less than a hundred quid a crappy pair.


The majority of the spectacle frames offered by Brille24, and the variety is enormous, were €39,90.  That’s £30 and includes the lenses.  The power required for my reading spectacles would have resulted in lenses as thick as champagne bottle bottoms so I paid extra for lenses made with a different refractive index leaving them as slim as normal strength lenses.  You can order bifocal or vari-focal lenses, tinted lenses (from 10-85% in grey, green or brown tints), polarizing lenses, light sensitive lenses, it’s better than the old Woolworth’s Pick 'n Mix sweet counter.  I know that buying from websites is a leap of faith but at those prices I had little to lose and everything to gain so I went for conservative and, I hoped, not presciently named ‘Toulouse’ frames.  A pair each of reading and distance spectacles came to £88 so I decided to get myself a pair of ‘Santos’ sunglasses with tinted (Pilot Green, 75%) distance lenses as well.  That way I could look cool on the beach and focus properly on the ‘less-is-more’ bikini couture.  They were an additional £30.  The whole lot, including shipping to an address in Germany, cost less than a pair of stinkons from Vision Express.


The company is German but their spectacles are made in Hong Kong.  Not everything that comes out of China is as ratty as the Chinese products we see here in Angola.  I would say that most of the components, if not all, of my Dell laptop, Panasonic TV, Samsung phone and tablet are made in China.  Being a German company, I imagined there’d be some sort of production standards and stringent quality control if they were to survive in a market as Teutonically discerning as Germany, so I was intrigued to see how well my spectacles stacked up.


If Brille 24 hadn’t told me they were made in Hong Kong, I wouldn’t have believed it; they are better than anything I recall seeing in Vision Express. 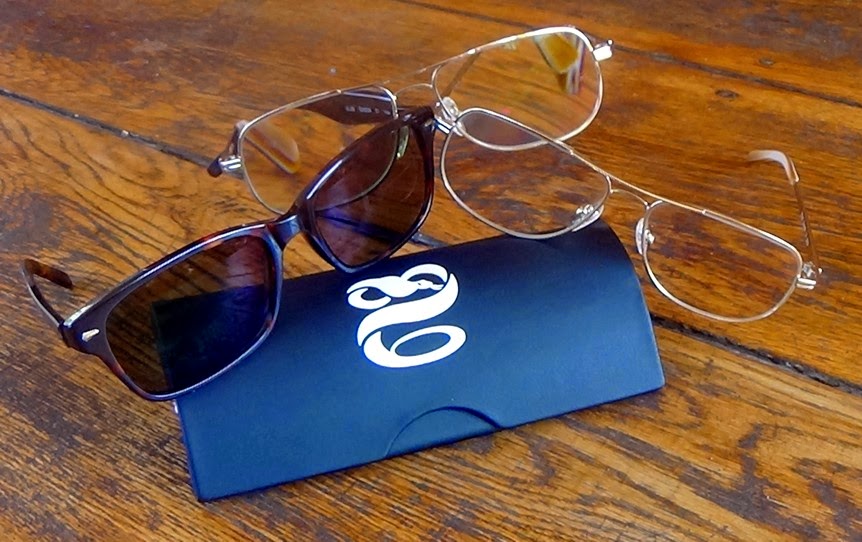 It was with real pleasure, then, that I stripped and cleaned my laptop (if, rather than do it myself, I had sent it to a computer specialist, they would have forwarded it on to the Natural History Museum), and upgraded both its memory and hard drive before starting on Alex’s bike.  I know this bike will shortly be replaced by his new Bulls bike (currently being dismantled and repackaged along with mine in Germany) but I intend to give his old bike to little Marta so want to completely refurbish it.  As I was stripping and repairing his bike, Alex pulled on his Bastian Schweinsteiger strip and ran off to annoy the Brazilians. Marcia did her bit for my hard drive by massaging cream into her skin within my startlingly clear field of view.  The tube of cream states it contains Lemon Vitamin C so I guess her skin, when it vanishes, will at least be healthy and smell nice.  I don’t know why she has to lash out on expensive vanishing creams anyway, she’s black.  If she wants to disappear, all she has to do is turn the lights out.