Yesterday, I was delighted to receive a visit from my old boss, Andy, and a former work colleague, Jaco who is an emaciated South African Boer.
Life in Africa is a case of Kill or be Killed, survival of the fittest so Boer females give birth on the move and Boer children are expected to keep up with the herd or perish in the bush having been scavenged by Rooinek predators (an animal whose habits are somewhat similar to jackals and Hyenas but not as well tolerated).  When Boer children start teething, generally at three weeks of age, they are not given teething rings or salves from Boot's the Chemist, they are given strips of cured and dried Rinder Fleisch to gnaw on.  This intense amount of protein at such an early age makes them as big and strong as the Buffalo they farm.  Clearly Jaco, at only a shade over 250lbs was the runt of the litter so I am pleased that Andy saw fit to keep him on by employing him on light duties hauling sixteen tonne generators into position before connecting them up.
Naturally I was happy to show them what I had been doing since I left them after the heart attack.  To be honest, since the snake bite I had done absolutely nothing save issue vague orders so now ambulant again, this was the ideal opportunity to see how my instructions had been executed.
Marcia and I are fencing the next plot but one down from us.  I was keen to see how they were doing.  Andy has bought several plots of land so I wanted to show him the fencing I was using.  To me it was the right balance between economy and quality, miles better than a simple chain link fence and only a fraction more costly, an extra expense easily recovered through lower labour costs.  Over the past two days I knew the labourers were installing a rolling gate across what will be the driveway and entrance to the site so I suggested we walked that far so I could see how they were getting on before jumping into his car and continuing down the road to visit the restaurant site.
﻿ 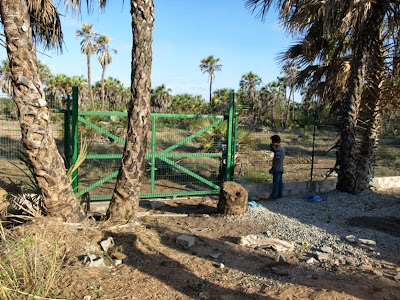 I have known Andy for a number of years, he was my boss for two of them.  I knew exactly the burning question he wanted to ask.  'Why build a gate behind a tree?'  He was too polite to do so but we have known each other long enough so I answered it for him.  'I have no idea why they put the gate here,' I said.  It was a nice gate.  Strong, well constructed, but about as much use as a chocolate fucking fire guard.  Chopping trees down is easy, although I hate doing so if it can possibly be avoided, the hard work is digging out the stumps.  All this extra effort and the death of a tree through sheer stupidity.

Fortunately, the Chinese labourers had arrived in a bloody great front loader with a back hoe so I asked them just to knock the one tree down and rip out the stumps. 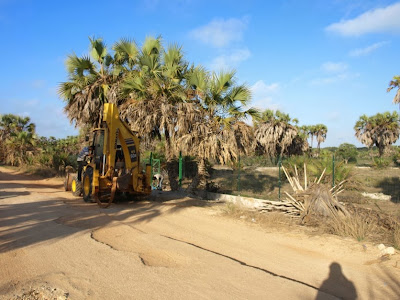 Andy, Jaco and I leapt into the car and carried on down to the restaurant site. 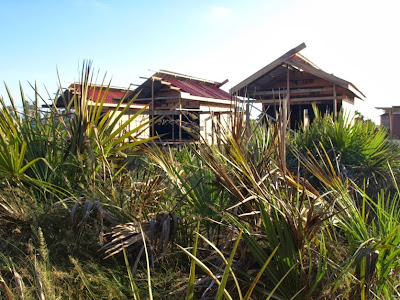 The land is getting a bit overgrown but the cottages are going up nicely, rising out of the bush.  Three of them have their roofs on. 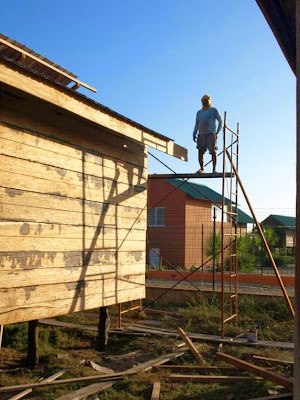 Boyet, the Filipino carpenter on top of the job.  The dark stains on the walls are the waste oil we are applying to the inside before cladding.  We will sand the outside and apply a lighter oil based wood preservative.  It pays to read Big Don Kev Alviti's blog 'Sawdust in my Socks' 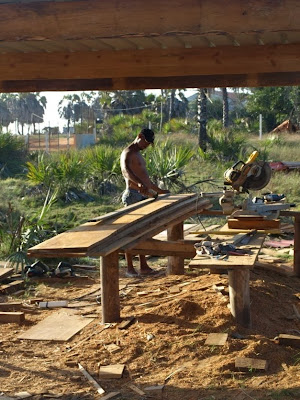 I think I have mentioned it before but every bit of timber is rough and has to be planed and shaped on site. 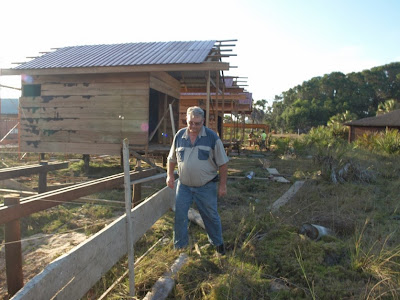 A very skinny Boer making his way through the site.  He is wearing a typical South African dual colour Egyptian cotton safari shirt.  They are available very reasonably priced per square metre from Rent-a-Tent in South Africa.  He has combined this with a pair of genuine American button fly Levi 501's available in his smaller size from Wal-Mart's 'Junior Texas Ranger' clothing collection in Houston and all other good North American outlets catering to the undersized.

On Sunday I am hoping that the bull dozer will turn up to clean up and level the rest of the land so we can continue the construction.  I have to do this now because we need to start laying electricity cables and other utilities.

Clearly my Chinese is not what it used to be.  As we passed the site being fenced on the way home, the front loader back hoe was gone and the tree and stump were still there.  Another case of Communists working to rule rather than doing a chap a favour.  Now I am going to have to pay to get the machine on site again.