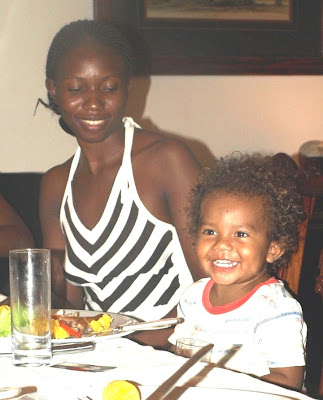 I like his Tom Jones' hair style, let's hope he has 'the voice'

Alex, my three year old son managed to get Marcia, his mother, arrested this afternoon.

Alex had spent the night with his aunt and cousins and on the way back from picking him up, the taxi broke down so Marcia hopped a bus. Thinking he might not be going home after all, he started screaming, in English, 'I want my Daddy!' over and over again. The driver spotted a transit policeman sitting astride his motorcycle by the roadside and stopped his bus.

All the passengers testified that Marcia was kidnapping a white English toddler.

So she phoned me but I was having a kip and missed the call. Thinking I might have run out of credit on my phone and could not respond to a missed call, she persuaded the police, for by then there were many and the bus was long gone, to allow her to buy credit and send it to me. But I was still miles away in dreamland. Takes a lot to distract me from Kylie Minogue.

She (Marcia, not Kylie) just got back now and woke me up, none too kindly either and at the speed only a very irate Angolan girl can shoot off Portuguese told me what happened.

'I pulled out your photo from my purse and said "look, his father is white", she said she had told them, 'of course the boy will look white as well!'

Marcia dragged the photo of me out from her purse, waving it inches in front of my face for emphasis. Without my glasses, I could not focus properly but there was no question about it, I was white.

'And that black whore's son policeman told me I was too black to be the mother of Alex, as if that chimpanzee would know!'

'Outrageous' I agreed, thinking both of the Policeman's impertinence and Marcia's colourful language.

'So he asked me what your name was so I told him, "Thomas" and he turned to Alex and said, "What is your father called?" and Alex said, "Daddy", so I explained to the Copper that Daddy was English for Pai so the policeman asked if Daddy had another name and Alex said "Dad" so I said to Alex, "No, no, what else do you call Daddy?" and he said, "Andy" so I tried again and he said, "Honey?" Can you believe that?'

Marcia paused for breath while I contemplated how terribly awkward for her the results of that line of questioning had been and how I had always hated her calling me 'Honey'. Far too American sitcom for me.

'Oh!' she said brightly, 'the paediatrician that delivered Alex came by in her car, saw us and stopped. She confirmed that she remembered you. Do you remember the fuss you made in the hospital when they would not let you in to see the birth? Anyway, that Doctor. She told the police that she remembered you well. Do you know who I mean?'

'Would that be the one who called security, had me pinned to a chair by two big bastards while the Corporal waved handcuffs in my face and after the birth told me I was the rudest man she had ever met?'

'Yes that one, she drove us home'

'Why didn't you invite her in?' I asked.

'She didn't want to for some reason'

Well. This is an amazing tale. For one thing I am grateful that ordinary citizens have the courage of their convictions, even if they turn out to be wrong. I am extremely grateful that members of the public were willing to dive in to protect my son. In how many cultures would people just have Tut-Tutted at such an unruly and noisy child before minding their own business? One can only admire the patience of the Police who while doing their job allowed Marcia repeated attempts to contact me, even calling over one of the street vendors who (illegally) sell telephone recharge cards on the street.

Finally, apart from the enormous coincidence, it just shows how sometimes it pays to stand out. If I hadn't made such a fuss, if I hadn't been so incandescent with rage at the stupid bloody rule they had here in Angola prohibiting the presence of the father at the birth of his child, maybe the good Doctor would not have recognised Marcia and simply driven by.

As an after note, the good Doctor is, as I later discovered, the top consultant paediatrician in Angola (which probaly explains the heart stopping $6,500 bill I received for her attendance and an overnight stay for Marcia in the clinic although a good portion of that could have been a sort of revenge tax). A couple of months after Alex was born, the Doctor was on the telly being interviewed on one of these human interest programmes. Ironically, she was arguing very convincingly that fathers should have the right to be present at the birth saying that it is a good thing for them to see how a woman suffers and how their presence would help calm the mother, so long as they behaved themselves. She then went on to describe in all too graphic detail an incident during a delivery she supervised that made me feel very uncomfortable.

I am reluctant to relate some of the terminology I had used to describe the professional who trained in Europe but refused to allow me to be present at the birth of my son and yet here she was, on TV, arguing my very contention.

All she had been doing was enforcing the rules as they were at the time but was clearly an activist trying to change them. I felt like a complete shit.

Apparently now, fathers can be present at the birth if they want to.

This is the second time she has helped Marcia and Alex. It is three years too late but I think a bloody great bunch of flowers and an unreserved, grovelling apology are in order. That and finding the loudest ring tone for my phone.
Posted by Hippo at 21:27